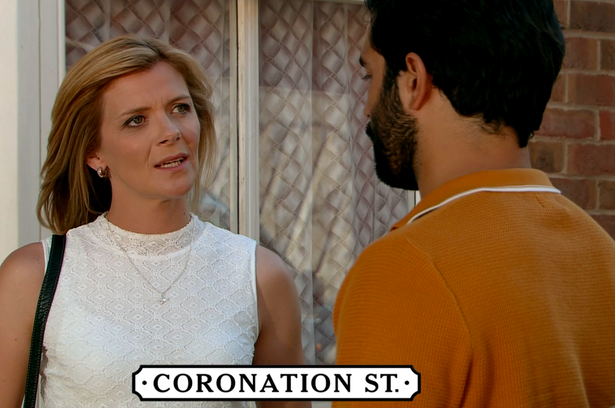 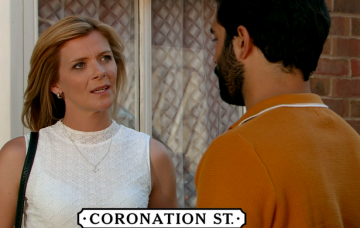 Harsh rejection after night of passion

There were sparks flying between Imran Habeeb and Leanne Battersby as they flirted over drinks in the Rovers last Friday night.

He was drowning his sorrows following the death of his father, and the former barmaid proved more than an adequate distraction from his grief.

The forward solicitor invited her back to his for another drink and a game of Scrabble.

And she almost dragged the bar stool with her in her haste to get out the door with him. (Who could blame her?!)

We can only guess at what they got up to back at his, but it’s unlikely they spent the night competing to create words with the longest scores.

But any hope from Leanne of a hot new romance on the cobbles is dashed tonight.

After their night together, Imran rather bluntly informs Leanne that she was nothing but a distraction from his family woes.

Harsh! Later, he’s in for a shock as he and Rana climb into the car taking them to Hassan’s funeral.

His ex-wife, Sabeen, is already sitting in there!

As he revealed last week, she is trying to take him to the cleaner’s in their divorce, so it’s no surprise that he’s none too pleased to see her.

Later in the Rovers, Imran apologises to Leanne for being rude – and it’s obvious there is definitely chemistry between the pair.

When Sabeen bursts in, shouting the odds about money, Leanne quickly declares that she is Imran’s PA – and Sabeen will need to make an appointment through her!

Perhaps Leanne can start dreaming of wedding dresses again after all – if Imran’s mum Saira doesn’t drag him away on a cruise she’d booked with Hassan.

Do you think Leanne and Imran make a good couple? Leave us a comment on our Facebook page @EntertainmentDailyFix and let us know what you think!