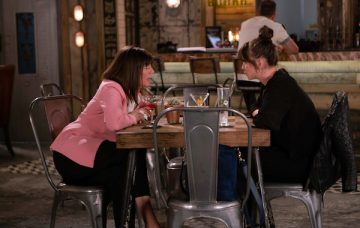 Sophie's set up on a date but she ends up kissing someone else!

Sophie Webster has a hot new love interest next week when she’s set up with Paula Cunliffe’s daughter, Isla.

Sally and Paula scheme to get the girls together but Sophie and Isla are mortified their mums have tried to set them up just because their both lesbians.

Sally is gutted by her failed attempt at matchmaking but it’s not long before Paula calls round at the house and makes it clear she’s interested in Sophie herself.

What will Sally have to say about that, we wonder?

As the pair talk, Paula reveals that she’s bisexual and the chemistry between them is tangible.

When Sophie kisses Paula, how will the older woman respond?

Meanwhile, Sally is worried that sister Gina, who’s just split up with Dev, has her eyes on Kevin so Sal decides to host a dinner party to set Paula up with Kev.

Obviously the whole thing is a bit of disaster, especially when Paula only has eyes for Sophie.

Later in the week Sally almost catches Paula and Sophie out when she finds them having a drink together.

But Paula quickly puts Sally off the scent by saying she’ll go on a date with Kevin.

Sophie is baffled until Paula explains she only intends to go on one date with him to keep Sally happy.

What could possibly go wrong here?

It was revealed earlier this year that former Doctors actress Stirling Gallacher would be joining the cast as a new cougar love interest for Sophie.

An insider told The Sun: “Sophie hasn’t had much luck with romance on the cobbles, but it appears this time it’s finally going in the right direction for her.

“She allows herself to start falling in love with the lawyer but Sally is furious when her friend tells her she has feelings for her daughter.”

Sally is reportedly “livid about the age gap and brands her friend a cradle-snatcher”.

Sophie was most recently in a relationship with Kate Connor, and was previously engaged to Sian Powers.

How angry will Sally be? Leave us a comment on our Facebook page @EntertainmentDailyFix and let us know what you think!