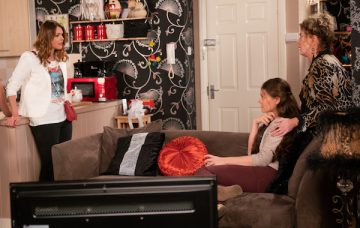 We have to admit that when we first heard that Coronation Street were planning on resurrecting Liz and Jim McDonald’s dead daughter, Katie, we were dubious to say the least.

Like Liz in last night’s episode, we couldn’t understand how the mix-up could have happened when Liz and Jim saw and held their baby who tragically died after being born prematurely in 1992.

But it becomes clear as the story unravels that Hannah definitely isn’t Katie and she’s just after Liz McDonald’s money.

And to make things worse Jim is in on the whole thing too, so he is.

Steve and Tracy become suspicious about Steve’s long-lost sister this week and while Jim will try to smooth it all over, Steve decides he wants his own DNA test to make sure Hannah is who she says she is.

But obviously this isn’t what Hannah had planned so luckily she has a trick up her sleeve and she and Jim manage to dupe Steve when it comes to doing the swabs for the test.

Meanwhile, Tracy has clocked on that all is not as it seems with Hannah and issues her a terse warning.

And Tracy Barlow is not the kind of woman we’d like to get on the wrong side of so we hope Hannah takes heed.

Later in the week Hannah questions Jim’s commitment to their plan as he seems to be going soft on Liz.

The scammer questions if Jim still has feelings for his ex. What will he say?

Hannah pulls another trick out of the bag when she discovers that Liz still has the money from the pub sale in her account and pretends to pass out.

Liz insists that Hannah moves in with her so she can look after her, much to the dismay of Tracy and Steve.

What do you think is going on with Hannah and Jim? Leave us a comment on our Facebook page @EntertainmentDailyFix and let us know what you think!