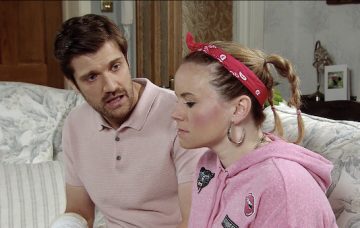 Is it over for the couple?

It looks like there could be trouble for Gemma Winter and Henry Newton next week when Henry’s shady side is revealed.

They have found love against all odds, and over the last few months Gemma and Henry have gone through the mill to be together.

But just when it seems they could be heading for a happy life together at last, there’s trouble looming for the pair.

After Johnny and Jenny Connor beat them to buying the Rovers Return, Gemma and her man are thrilled when the new landlords offer them a job behind the bar as compensation.

But viewers will see Henry in a spot of bother by the end of this week as the family of his ex fiancee Cressida demand he pays them the £20,000 they lost when the wedding didn’t go ahead.

Desperate for some cash, this Friday’s double bill will see Henry emerging from the new-look Rovers’ barrel store with an apparently broken arm and an announcement that he is going to sue the Connors for his injury.

But by next week, Henry’s true colours will be shown when he admits to Gemma that his injuries are fake.

She confronts Henry about his dodgy ways and he finally reveals that he’s being hounded to pay £20,000 to Cressida’s family, leaving Gemma stunned.

But when Henry begs Gemma to go along with his fake injury plan to get the cash to pay off his ill-fated wedding, will she agree?

The idea of scamming their friends doesn’t sit well with the new barmaid, but when Henry points out that his life is in danger, will she change her mind?