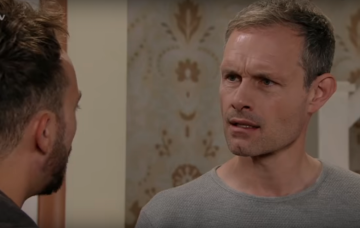 'They end up hating each other more than ever'

Gail’s sons will develop a violent hate for one another in a family feud expected to continue throughout the whole of next year in Corrie.

David Platt and Nick Tilsley will come to despise each other more than any before after their rocky relationship worsens when a business deal goes sour.

And apparently it will be their nan Audrey Roberts’ £80,000 windfall from late pal Archie Shuttleworth that sets the brothers against each other, with the rest of their family drawn into the “corrosive” clash.

Considering David previously attempted to kill Nick after he had an affair with David’s wife Kylie, things could get very messy.

Corrie producer Iain MacLeod told journalists that smoothy conman Lewis Archer’s attempts to nab Audrey’s cash will set the wheels in motions for David and Nick to be at odds.

“The Lewis and Audrey story we’re running at New Year is the launchpad for a massive family saga for the Platts that will draw in and pit against each other all the members of the Platt family in counter argument and recrimination,” he said.

“Nick and David end up running a new business together on Victoria Street – a barber shop with a pun in the name.

“A secret emerges after the New Year which proves so corrosive that they end up hating each other more than they ever have.”

Read more: Coronation Street SPOILER: Could the end be near for David and Shona?

The soap boss also teased Biblical amounts of animosity between the fractious pair.

“It is similar to Cain and Abel. One of them isn’t going to kill the other, but they’ll come pretty close in how much they come to loathe each other,” said Iain.

“It starts in January and plays out over the next 12 months.”

In the episodes running up to Christmas, their mum Gail will be seen stalking Lewis as she tries to prove he his up to his old swindling tricks.

Actor Jack P. Shepherd suggested a couple of months ago that a major show character could also meet their end in the festive episodes.

He told the Daily Star Sunday the victim could be linked with his onscreen family – but ruled out a storyline featuring the death of a beloved pet.

“This year I think someone dies at New Year,” the 30-year-old is reported to have said.

He continued: “It might be someone to do with the Platts! And no, it’s not David’s dog.”