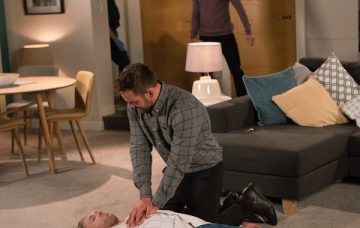 Corrie SPOILER: Death by drugs at Michelle and Robert’s

Ryan is in big trouble when Cormac dies in the flat

Ryan Connor gets himself in big trouble next week when a planned night out at a new club takes a tragic twist. 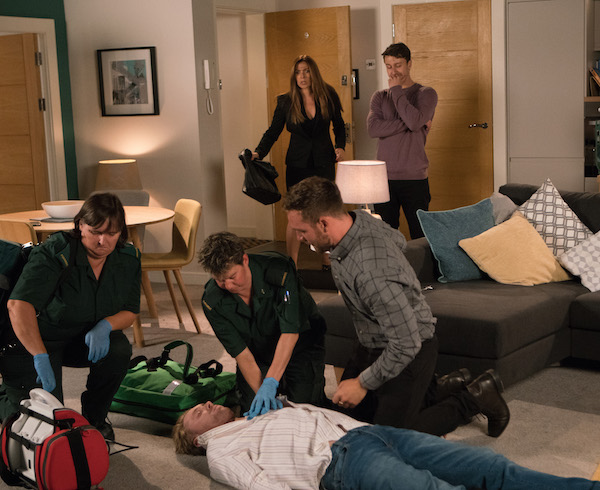 At the start of the week Daniel is getting annoyed at Cormac who continues to wind him up at the Bistro.

Adam tells him to be careful, warning him that Cormac’s dad is dangerous drug gangster Ronan Truman.

Worried Daniel then tells Michelle and Robert who Cormac’s dad is leaving them slightly concerned about their newest employee.

Meanwhile Sophie, Bethany and Ryan are all impressed when Cormac tells them he can get them all into a new club opening in town.

Michelle warns Ryan to be careful but he brushes her concerns off.

Later, while they’re getting ready to go out, Cormac offers Ryan a line of coke.

Corman takes some himself and then offers some ecstasy pills to Sophie and Bethany.

Disgusted, the girls quickly leave and Ryan races after them.

Sophie is horrified and lays into Ryan, reminding him that his drug dealing almost cost her her life once already.

Back in the flat, Cormac puts a baggie of drugs into Ryan’s pocket.

Events take a sinister turn when Ryan arrives back at the flat to find Cormac fitting on the floor.

Terrified he calls Ali who rushes over and attempts CRP on Cormac.

But when he asks Ryan when they ambulance will be there, he’s stunned to realise Ryan didn’t call one.

Ryan tries to explain that he was panicking and didn’t know what to do.

An ambulance eventually arrives, but it’s too late for Cormac who dies on the floor.

How will Ryan get himself out of this situation? 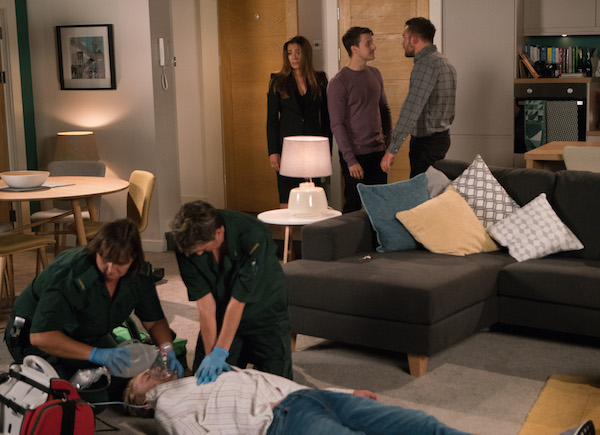 One thing is certain, Cormac’s dad Ronan will be after revenge for his son’s death.

It’s been revealed that Ryan, Ali and Michelle will all be involved in a horror car crash later this year and it’s got something to do with Cormac.

According to Metro.co.uk, Michelle’s wayward son Ryan is involved and possibly even left for dead in the horror smash.

The storyline kicks off when Ryan does nothing to save the life of his drug taking and dealing friend.

And it’s Michelle who finds herself covering up her son’s crime – and events soon spiral out of control.

The climax of the storyline ends with a car crash, and Michelle’s other son Ali Neeson is put to work trying to save lives.

But who will survive?

New photos from the set suggest that the accident is caused by a high-speed chase and that Michelle and Ryan could even be run off the road.

“The team have been hard at work filming these scenes, but there are plenty of big secrets and twists which will keep the viewers on the edge of their seats this autumn. The crash is just one part of a very explosive set of storylines and the consequences will be massive for all involved.”

Ryan returned to the cobbles in May – and caused drama from the off-set.

And there is plenty of rivalry between the pair…

Hard-drinking DJ Ryan has an eye for mischief and has already got himself into trouble with Bethany Platt and her mum Tina.

Is Ryan in big trouble? Leave us a comment on our Facebook page @EntertainmentDailyFix and let us know what you think!