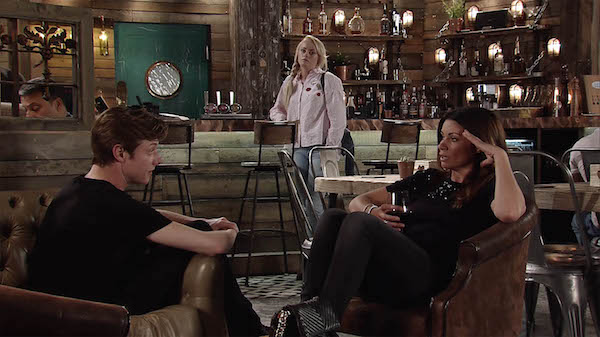 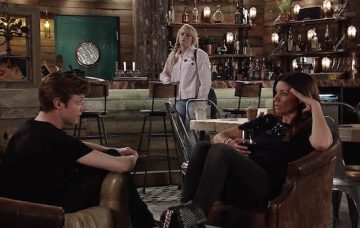 Sinead Tinker is thrown into turmoil next week when she spots boyfriend Daniel whose baby she’s carrying kissing his ex-lover Carla Connor.

As the week kicks off Carla, who employs Sinead at Underworld, is annoyed when she catches the machinist using factory offcuts to fix up Cathy’s coat.

She orders Sinead to work extra time to pay for the material, leaving Sinead concerned.

When Daniel finds out he approaches Carla and tells her about the baby, asking her to go easy on Sinead.

Carla promises to cancel the overtime and to keep quiet about the pregnancy and Daniel kisses her on the cheek to say thank you.

But Sinead spots the tender moment between the ex lovers and immediately jumps to the wrong conclusion.

Later, she confronts Carla about the kiss, but as her boss tries to reassure her that it was nothing, Sinead reveals that she’s started bleeding.

A panicked Carla quickly rushes her off to hospital. Will the baby be ok?

Sinead recently revealed she was pregnant to unsuspecting fiancé, Daniel Osbourne,  just at the same moment he quit her job at the factory on her behalf.

The saga started when Daniel takes some vintage clothes to the factory to show Sinead a few weeks ago.

But it turns out his innocent actions land him in big trouble when a moth flies out of the garments and gets lost in the factory.

Desperate to make amends, Daniel went home and puts the vintage clothes in the freezer to kill off any moth eggs, but it seemed the damage had already been done when later on then-factory boss Alya showed an order to a customer and the undies were littered with moth holes.

Daniel confessed what he did to Carla but it was too late – Alya was on the warpath.

Angrily accusing Daniel and Sinead of being responsible for the moth infestation, they all came to blows and before Sinead knew what was happening, Daniel quit her job for her on her behalf!

After discovering that Sinead is indeed up the duff, Daniel had to do some very quick back pedalling to get the machinist’s job back.

Do you think Daniel and Sinead will make good parents? Leave us a comment on our Facebook page @EntertainmentDailyFix and let us know what you think!