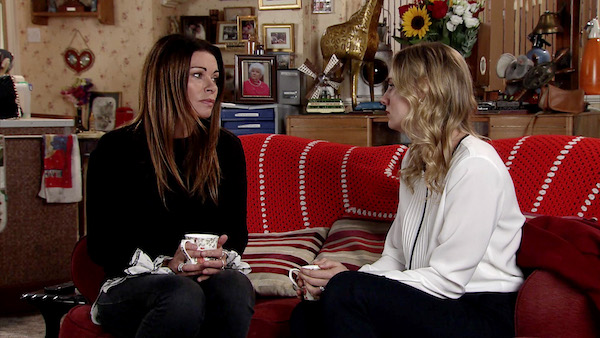 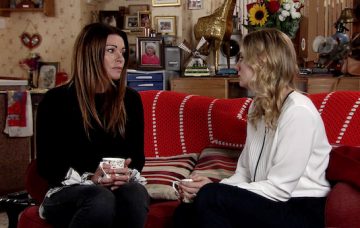 She knows there's something fishy going on

Carla Connor is no fool and Nick Tilsley should know that by now.

But it seems he’s forgotten because as he tangles himself up in even more lies, Carla’s onto him and is about to expose whatever it is he’s hiding.

Since his return, Nick’s been evasive about his “business commitments” in Nottingham. And he’s been taking secret phone calls from “E” all-the-while trying to win Leanne Tilsley back.

After discovering just how much has happened in his absence, Nick has decided to stick around and make a go of his relationship with Leanne. She believes he’s changed, but her sister, Toyah, can spot a rat a mile off and insists Nick can’t be trusted.

It seems she’s right and Carla thinks so too.

With Nick going into business with her, Carla understandably wants to know what other commitments he has and does some digging.

She discovers he co-owns a restaurant with a woman called Elsa – which would explain who”E” is. But we’ve heard him talking really rather sweetly to E so are they partners in more than just business?

Nick, who is now screening Elsa’s calls, is panicked when he discovers Carla’s been investigating him and he flips out when he catches her looking at his restaurant website. Any good businessman would welcome the interest, so now we know he definitely has something to hide.

Never one to back down, Carla announces she’s off to Nottingham to check out the eatery for herself. Quick-thinking Nick talks her out of it and promises he’ll tell her the truth about what’s really going on.

He goes on to claim he did a mate a favour and went in on a restaurant with this guy’s wife but it’s all for tax reasons.

Carla buys it, but once again it becomes clear he’s lying when he calls Elsa and tells her his mum is ill and he has to stay… that’s news to us – and to his mum, Gail!

Nick seems to think he’s covered his tracks as continues to woo Leanne back and promises her this time he’s committed and just has to tie up some loose ends in Nottingham.

But then his “loose ends” come to him instead when Elsa turns up on the Street!

He catches her as she’s about to go to Number 8 and visit ‘poorly’ Gail. As he steers her towards the Bistro, Carla watches on. She realises she was right all along and there is more to his story than he’s letting on.

Determined to get to the bottom of it, Carla steals Nick’s car keys and takes a sneaky peek at his sat nav. She’s surprised by what she finds – but what does she know?

It turns out Elsa’s no pushover either and when she clocks Carla getting out of Nick’s car, she follows her and demands to know what’s going on.

Carla reveals she’s Nick’s business partner and the women sit down for a chat. But what will Elsa reveal about what Nick’s really been up to? And will Carla tell Leanne everything to save her more heartbreak?

Should Nick be given a second chance? Leave us a comment on our Facebook page @EntertainmentDailyFix to let us know what you think!