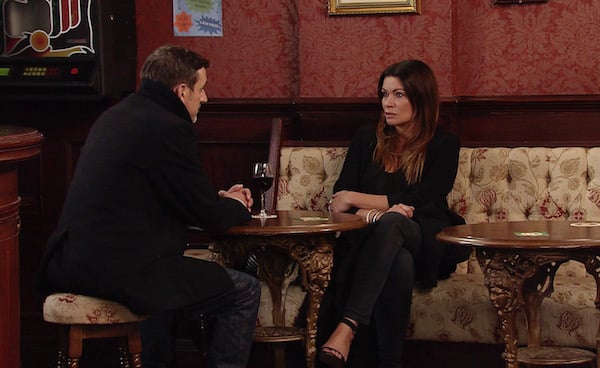 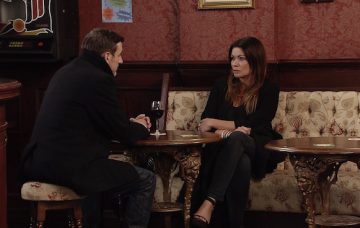 Carla's week is about to go from bad to worse

Just when she thought going into business with one ex husband was bad enough, things are set to get even more complicated for factory boss Carla Connor.

After spending the last few weeks working at Underworld alongside former husband Peter Barlow, Carla’s set to be left fuming when she discovers he’s sold his shares to none other than Nick Tilsley.

But if that wasn’t awkward enough, she then discovers the secret that Nick’s been hiding since he returned to Coronation Street, a secret so huge that it could destroy his budding reunion with Leanne.

After spending so much time with Peter at work, it was starting to look like Carla was thawing towards her ex and that the pair could have a second chance at romance.

But before Carla could confess her feelings to her ex, Peter had signed on the dotted line with Nick and sold his shares for the factory to the worst possible person.

Carla is fuming that she now has to spend all her waking hours working with Nick, not only putting an end to her reunion with Peter before it even began, but also leading her to do some digging on Nick.

After finding out that he co-owns a restaurant in Nottingham, Carla decides to find out more about her business partner’s other ventures and tells Nick she’s off for a day trip to his former stomping ground.

But Nick is horrified at the prospect and, clearly hiding something from everyone, he promises to come clean.

Shady Nick then tells Carla that he went into business with a mate’s wife called Elsa for tax reasons, but it’s clear the wool is far from being pulled over Carla’s eyes.

Thinking he’s got away with his tangled web of lies, Nick is then shocked to see Elsa on the cobbles – and she is clearly not just a business aquantence.

As Nick steers Elsa into the Bistro before anyone can see her, Carla is one step ahead and grabs his car keys from his desk and does some snooping.

As she gets in his car she makes a shocking discovery…  but what has she found?

Meanwhile, Elsa sees Carla getting out of Nick’s car and follows her to Roy’s flat. But what will happen when the two women come face-to-face?

Carla admits that she’s Nick business partner, but will Elsa reveal what Nick’s been doing since he was last seen in Weatherfield?

And more to the point, will Carla confess who she really is, or will she be keeping her cards close to her chest?

Do you think Nick deserves a second chance? Leave us a comment on our Facebook page @EntertainmentDailyFix and let us know what you think!

Who is Zoe Ball’s boyfriend, why did she split from husband Norman Cook and is she on Instagram?