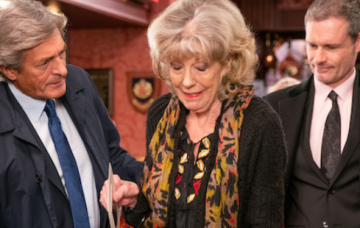 Corrie SPOILER: Audrey will get ripped off by Lewis AGAIN despite family’s warnings

Slippery conman Lewis Archer will break Audrey Roberts’ heart yet again this Christmas as he fleeces her out of an unexpected windfall.

In scenes set to air next week, Audrey will return staggered from friend Archie Shuttleworth’s funeral when she discovers he has left her £80,000 in his will.

But there’s barely time for the ink to dry on the paperwork before deceitful Lewis shows his true colours after months of convincing Audrey he had turned his back on his cheating ways.

Daughter Gail Platt and grandson Nick Tilsley will do their best to warn hair salon owner Audrey about the intentions of her posh lag lover – played by Nigel Havers – but she refuses to believe them… until her bank account is cleaned out.

Gail looks to have caught Lewis red-handed on her return from Milan when she spots him canoodling in a hotel with an another, unknown woman.

But her plan to capture evidence of Lewis’ underhandedness falls apart when a bungled attempt at a covert snap with her mobile phone results in Gail taking a selfie.

And as she attempts to persuade Audrey he has been caught playing away, Nick pushes his nan to switch the cash from Archie into a secret account away from Lewis’s light fingers.

Following heated confrontations with Audrey, Lewis will later threaten Gail during the New Year’s Eve celebrations, leaving her concerned he will do a runner.

However, it seems Lewis has thrown Gail off the scent when he pleads with Audrey to meet him for dinner where he will explain all.

Unfortunately for Audrey, the truth seems to dawn on her when the smooth-talking crook stands her up.

And it seems Gail and Nick will be proved right after he receives a call from his financial adviser who has some very bad news about the money Audrey received from Archie – it has all gone.

Could this be the last viewers see of a fleeing Lewis in Weatherfield?

Or has there been some kind of terrible misunderstanding between Audrey and the fraudster?