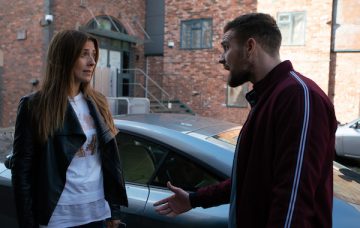 The shamed medic packs his bags next week

Ali Neeson consider leaving the cobbles next week following the dramatic events viewers will see unfold over the coming days.

But why does he have his bags packed and will Michelle be able to stop him from leaving?

Ali answers their questions but when they mention the firearm in Ronan’s car, he denies knowing there was one there at all.

Later Michelle makes a shocking discovery while Robert is suspicious of how Ali’s acting. Does he have something to hide?

When the police question Michelle about what happened, she’s horrified to learn there was a gun in the car, Ronan clearly meant business when he came after her and the boys.

Michelle then arrives home to find Ali with his bags packed. What’s happened and where is he going?

They eventually have a heart-to-heart and Ali makes a big revelation to Michelle who promises to take his secret to the grave.

She then confides in Robert about Ali’s fears over Ronan. Will it be enough to convince Ali to stay in Weatherfield?

He’s not having the best time at the moment – to put it lightly. And it’s all pretty much down to Ryan.

As well as having a terrifying drug dealing gangster after his blood, Ali has been suspended from his job at the medical centre.

His boss dropped in to see him on Monday (October 8th) night and told Ali he couldn’t work while he was involved in a police investigation.

Ali was so angry at the situation Ryan has dragged him into that he didn’t even care that Ryan had been beaten up in prison and is currently no.1 on Ronan’s hitlist.

Will Ali leave or will Michelle convince him to stay put?