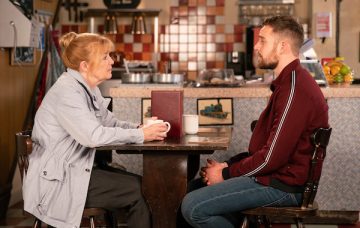 The young doctor is struggling with his guilt

Poor Ali Neeson is still struggling with the guilt of killing Ronan Truman next week and even considers turning himself in to the police!

It comes after Ronan’s mum Patti arrives on the cobbles looking for Ali.

She approaches him and asks him to talk her through her son’s final moments, leaving Ali rattled.

Struggling to keep his emotions in check, he lies to her and tells her he did everything he could to help the shady gangster.

When Patti leaves, Ali breaks down and tells mum Michelle that he can’t live with the guilt.

Later Ali rocks up at the flat drunk and confides in Robert about how he killed Ronan, can’t deal with the guilt and is considering handing himself in.

Robert pleads with him not to turn himself in but to continue with his doctor training where he’ll have the opportunity to save thousands of lives.

A thoughtful Ali takes Robert’s words on board.

He’s pleased when Robert then offers him a job at the Bistro until he’s allowed to return to the hospital.

Ali thanks Robert and Michelle for supporting him through everything. But has he really changed his mind?

The trainee doctor killed Ronan following the horror car smash that left Leanne and Ryan both fighting for their lives.

After running over Leanne, Ronan smashed his own car into a fence and a post impaled him through the abdomen.

A stunned Ali went to help him but changed his mind when he spotted the dealer had a gun stashed in his glove box.

Read more: Corrie Sinead makes a decision about her baby

He then listened as Ronan told him that it wasn’t over, even if he went to prison and Ali made the decision to kill him.

He held Ronan’s hands over the fence post and pulled it out, making sure his prints weren’t on it.

The gangster died instantly as the fence post had been stopping him from bleeding to death.

Will Ali get away with killing Ronan? Leave us a comment on our Facebook page @EntertainmentDailyFix and let us know what you think!