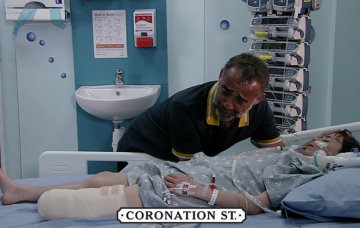 The soap has become famous for raising awareness

Coronation Street is renowned for showing hard-hitting storylines that raise awareness, helping people to open up and talk about things that they might not have spoken of or known about before.

One of the soap’s most recent storylines that saw Jack Webster contract sepsis in a cut on his knee while out playing football, helped raise awareness for the condition that kills five people every hour in the UK.

Viewers were left shocked when Jack’s health deteriated quickly, leading to his dad, Kevin, having to make the heartbreaking decision to have his son’s lower leg amputated in order to save his life.

The show has always received high praise for storylines like Jack’s fight for his life, as well as other recent hard-hitting plots like Aidan Connor’s suicide, David Platt’s sexual abuse and Bethany Platt’s grooming ordeal.

And now the soap has won more praise, this time from a terrified mum whose little girl became ill very suddenly.

When Aoife Duffy was worried after finding her four-month-old daughter Eabha was seriously unwell, she remembered watching Jack’s storyline and, recognising the symptoms, she rushed her straight to A&E.

The mum told Belfast Live: “We made a GP appointment, but I Googled her symptoms and remembered on Coronation Street when the symptoms weren’t picked up by the GP several times, so I didn’t want to take any chances.”

Instead Aoife took her baby straight to hospital, a move which likely saved her life.

“They saw us straight away and took a sample of her urine which showed signs of infection.

“Quite early on the doctor could see that sepsis was developing. They feared meningitis and had to test for it.”

Thankfully the doctor discovered what was wrong and soon got the sepsis, which came from a simple urine infection, under control.

Little baby Eabha is now fighting fit but, looking back, mum Aoife obviously feared the worst after seeing what happened to Jack Webster.

She told the publication: “I can’t stop thinking about what would have happened had we just bought her to the GP and not followed our gut instinct.

“Please don’t wait for your child’s symptoms to worsen. If you have a gut instinct that something isn’t right please take them straight to hospital. I could have been telling a very different story if I hadn’t.”

Do you enjoy Corrie’s hard-hitting storylines? Leave us a comment on our Facebook page @EntertainmentDailyFix and let us know what you think!