Soap star Sally Dynevor has revealed she refused to watch Sinead Tinker's cancer storyline in Coronation Street after her own battle with the disease.

The actress discovered she had breast cancer while filming a storyline for Sally Webster who was battling the same disease.

On Friday night's episode, Corrie viewers were in tears as Sinead slipped away after fighting cervical cancer.

Speaking on Podcast You, Me and the Big C, Sally said: "I just can't watch it.

"I think they're doing a brilliant job, so brilliant it makes me not want to watch it. Only because it's self-preservation. I don't need to keep going there."

In 2010 Sally was preparing for a storyline that would see her character diagnosed with breast cancer when she discovered a lump.

The mum-of-three, 56, said: "I fainted when I was diagnosed. I woke up on a bed, looked at the doctor and said, 'I'm so sorry, you've got me mixed up with my character. That's my character.' 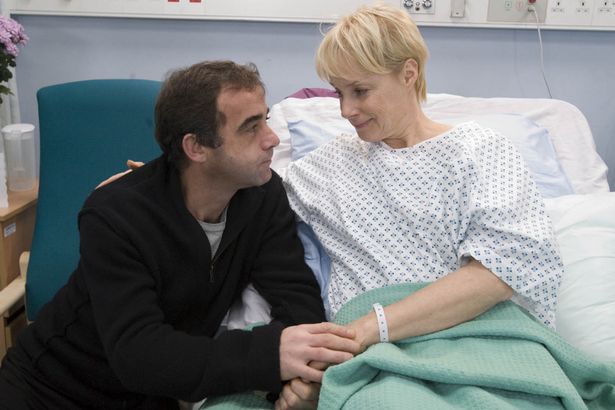 Sally battled the disease in the soap (Credit: ITV)

"I was like, 'This is not ­happening to me.' I phoned our producer and said, 'I've got breast cancer, but it's fine. I'm going in next week to have the lump removed and then I'll be back at work. So keep the story going because we need to tell this story.'

"I had the lumpectomy and thought I'd be back at work the next week. But the reality was it had spread and I needed chemo.

"I was in total denial. I never thought it would happen to me."

But while Sally couldn't face watching the storyline herself, she did tell how glad she was that Corrie had tackled the subject.

She said: "It's really important for soaps to tackle these storylines.

"It's a good message to get out there about checking."

What did you make of the storyline? Leave us a comment on our Facebook page @EntertainmentDailyFix and let us know what you think!