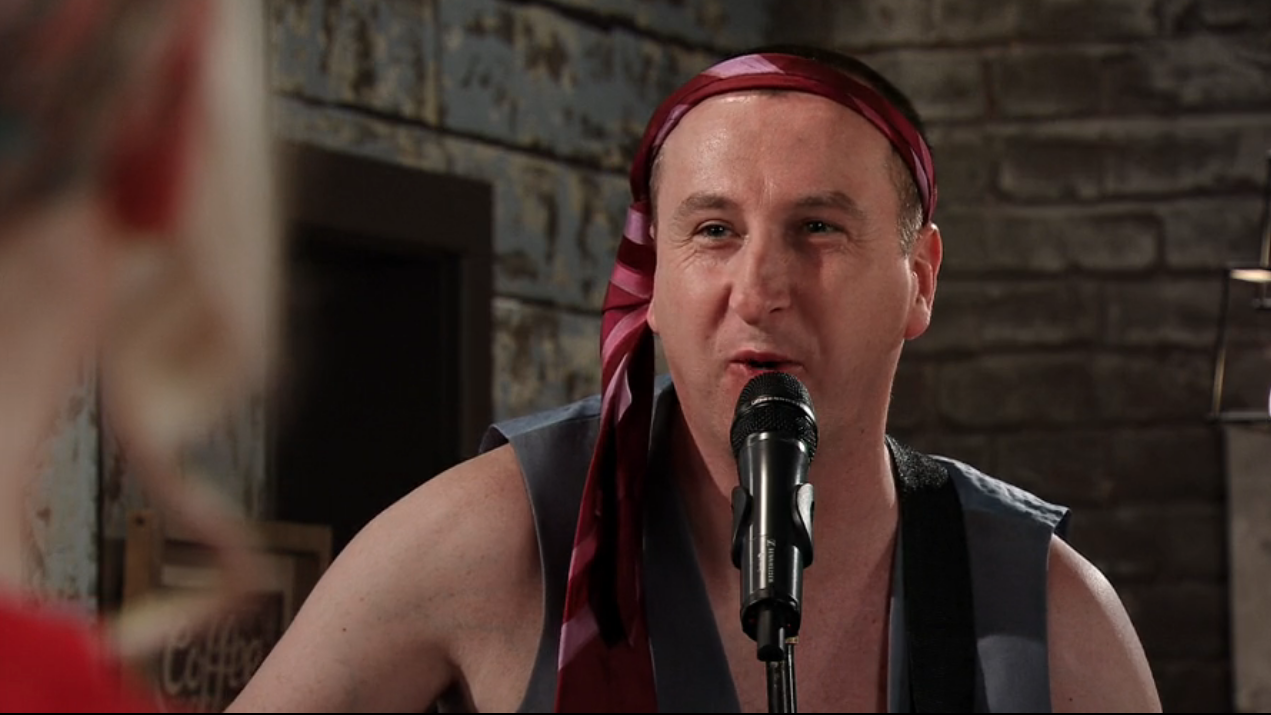 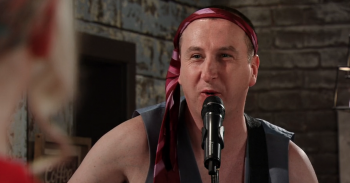 Corrie Kirk’s hilarious ‘Our Souls’ song tipped for number one

Viewers of Kirk Sutherland’s hilarious musical attempts at bringing his rowing family together during last night’s Corrie have hailed the scene as among the best from the soap in ages.

Bertie’s christening do had been marred by bickering between Ken Barlow and Beth Tinker following a spat over a dog fouling fine.

And as tempers frayed and the likes of Claudia Colby, Tracy McDonald and Steve McDonald were all drawn into the spat, eternal optimist Kirk stepped up with his guitar to bring harmony to the proceedings.

Wrapping his tie around his head and wearing a waistcoat without a shirt underneath, ‘El Kirko’ – knicker packer Kirk’s performing alter ego – expressed regret for Beth and Ken not getting on before dedicating a song to Bertie and his parents Sinead and Daniel.

“It’s called ‘My Soul, Your Soul, Our Souls’,” Kirk said by way of introduction – but his Manchester accent made the last two words sound as if he was saying a cruder one.

“Did he just say…?” enquired Tracy as eyebrows were raised throughout the room as Kirk warbled about how ‘beautiful our souls are’.

“Yes. Yes he did,” deadpanned Steve, taking a swig from his pint.

Fans were in hysterics over the “genius” cheeky  lyrics, with commenters on Twitter joking Kirk should be aiming for a Christmas number one single – or a place on The X Factor.

“Our souls are beautiful…” 🎶😂 Genius from Kirk on #Corrie 🤣

I am absolutely crying at @andywhyment81’s song on @itvcorrie with lyrics that include ‘Our Soul’s’ 🎙#Corrie #Kirk pic.twitter.com/8BTAoEXoQh

Gonna be hard pushed to see owt better on telly this week than Kirk doing “My soul, your soul, our souls” on @itvcorrie absolute gold!

Funniest thing I have seen in a long time on @itvcorrie . Promising new superstar Kirk with his song … Your souls, my souls, our souls (said in a Mancunian accent ar souls ) 😂😂😂. Should be number one

Funnily enough, Kirk – played by actor Andrew Whyment – has already appeared before Simon Cowell, as part of a 2010 ITV skit.

And although Andrew has been thanking fans on Twitter for their appreciate remarks, he has laughed off being dubbed ‘Kirk Springsteen’.

He also revealed his fellow cast members were so tickled it “only” took two or two takes to film his performance without corpsing from others in the scene who were too creased to keep a straight face.

“Only a couple [of times] to be fair as we’d done line runs and rehearsed it a few times,” he replied to one observer on Twitter.

Sadly however, Andy seems to have ruled out the possibility of a Corrie number 1 hit single.

Starting a campaign to get Kirk’s “Your Soul, My Soul, Our Souls” to Christmas number one#Corrie pic.twitter.com/05eUylGnu4

Here’s hoping for a Christmas Miracle on Coronation Street and he changes his mind.