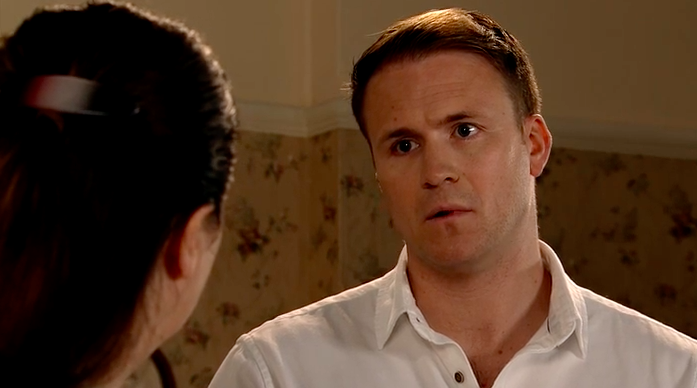 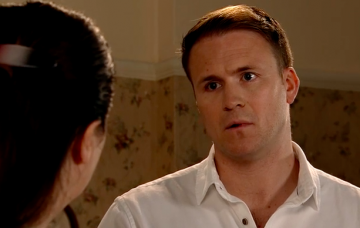 Corrie: Is Jude’s biggest lie of all that he’s NOT Mary’s son after all?

Coronation Street’s Jude Appleton doesn’t have many fans at the moment.

He’s been exposed as a pathological liar and expelled from Weatherfield – but viewers believe he will worm his way back.

And they believe he’s still hiding the most shocking secret of all!

The fantasist has lied about being a marine biologist and then a paramedic when, in fact, he appears to be unemployed.

Jude also took the credit for saving Roy Cropper’s life after he was stung by a bee, when ITV viewers knew it was really Dr Ali Neeson.

Cringeworthy scenes showed a shameless Jude being hailed a hero and even accepting a Good Samaritan award and a cheque for his ‘good deeds’.

But most shocking of all was when Jude brutally attacked beloved character Mary for threatening to expose his lies.

The walls finally came tumbling down upon Jude in Wednesday’s double bill (24 October) and he fled Weatherfield when Mary and wife Angie rejected him for all his deceit.

However, fans believe Jude is still hiding the most shocking secret of all – that’s he’s NOT Mary’s son after all!

Really starting to think #Jude is not #Marys real son. The lies keep coming. Thats got to be the big final lie #itvcorrie

#Corrie is Jude even Mary’s son? Or is that a lie too? 🧐 @APattiClare

Doid Jude and Mary ever have a DNA test ? #corrie

I bet it is going to turn out that Jude wasn't even the real Jude. He's just some conman wanting to rip Mary off. #Corrie

Jude, where have you hidden the real Jude. I am starting to be convinced that he is hiding Mary’s real son somewhere in the world #Corrie

Is Jude really Mary’s biological son? Did we ever see proof? #Corrie

Another added: “I bet it is going to turn out that Jude wasn’t even the real Jude. He’s just some conman wanting to rip Mary off.”

A third agreed, tweeting: “Jude, where have you hidden the real Jude. I am starting to be convinced that he is hiding Mary’s real son somewhere in the world.”

One more pondered: “Is Jude really Mary’s biological son? Did we ever see proof?”

Intriguingly, one viewer tweeted: “Imagine if Jude wasn’t the real Jude but had stolen his identity years before and the real Jude is indeed a marine biologist and Mary’s real son. He is such a liar anything is possible.”

Cryptically, the official Coronation Street Twitter page liked the tweet – so does that mean she’s spot on?

Viewers know that Mary gave her son up for adoption after being raped.

Will Jude be exposed for pretending to be Mary’s son? Or do Corrie scriptwriters have another twist in store?

Do you think Jude might be lying about his relation to Mary? Leave us a comment on our Facebook page @EntertainmentDailyFix and let us know what you think!