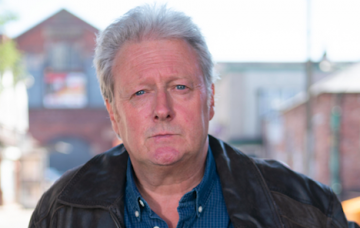 Fans have been divided over the character's shocking return

Charles Lawson has revealed that his hugely controversial return storyline had to be hastily rewritten by Corrie soap writers.

It’s been one of the most talked-about plots in Coronation Street’s history, as Jim McDonald arrived in Weatherfield with shocking news.

He claims the daughter he and Liz believed had died prematurely in 1992 is, in fact, alive.

Fans were outraged at the thought of the ‘dead daughter’ being resurrected for the sake of a storyline.

But the truth is perhaps worse – that Hannah isn’t the daughter at all, but a charlatan working alongside Jim to scam Liz and Steve.

ITV viewers were just as outraged when Hannah and Jim shared a passionate kiss and revealed the truth – they want revenge for Jim being ‘forgotten’ in jail.

As the story begins to unfold, with Steve soon smelling a rat, actor Charlie has revealed that, behind-the-scenes of the soap, writers had to quickly turn the scripts around.

He admits he was supposed to return for a longer stint on the soap.

The 58-year-old Northern Irish star told Metro.co.uk that his theatre commitments threw a spanner in the works.

He explained: “The storyline is what it is. I think it’s fairly common knowledge that I was meant to come back for a year but I’d committed to play Rebus. So the storyline, I would say, has changed fairly rapidly. And actors agree to a job, we show up and we do it.”

However, he continues: “But Bev and I have done some good work with this and Hannah and Simon too. And it won’t be boring.”

The actor also gave a hint that he MIGHT return in the future saying: “The dynamic is really between Jim, Hannah and Liz. It’s to be hoped that the dynamic in the future will be Jim, Liz and Steve, that would be great for next year, maybe. We’ll see if the phone rings in December.”

Charles recently defended his character insisting he’s a good man deep down who is still in love with Liz.

He also hinted that Hannah is the mastermind behind the scheme, and that Jim has second thoughts as soon as he sees Liz.

He adds: “It all goes frightfully wrong, it goes pear shaped very quickly. That relationship between Jim and Hannah is destined for disaster and it’s not built on any foundation. It’s pretty bleak.”

And we don’t envy Jim or Hannah when Steve’s fiancée Tracy Barlow finds out, either!

Do you have any sympathy for Jim at the moment? Leave us a comment on our Facebook page @EntertainmentDailyFix and let us know what you think!