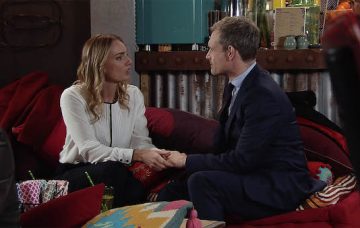 Viewers have been left confused after Nick Tilsley revealed he needed to pay his wife Elsa £40,000 after ‘borrowing’ the money from her to buy the factory.

But fans couldn’t help but notice it’s not the first time the highly specific amount of money had been mentioned.

In fact it seems to have been at the centre of some of the soap’s biggest dramas of recent times.

First it was the exact amount conman Lewis Archer stole from Gail Platt all those years ago.

More recently Lewis returned the money to Gail in an effort to convince Gail’s mother Audrey that he had changed.

At around the same time £40,000 was the amount of cash left to Sally Metcalfe as the Mayor of Weatherfield for her charity fund.

And it was that same £40,000 that Sally, who is now languishing in prison, was conned out of by conman Duncan Radfield.

Fans have begun to notice the bizarre coincidence and took to DS Forums to share their findings.

A second said: “He could ask Gail to give him the 40K that Lewis gave to her a while back. She’d do anything for her beloved Nick.”

And they’re also convinced the £40k Gail has came from Duncan, completely inexplicably.

One tweeted: “Does anyone get the feeling that £40k in Gail’s bank account is tied in with the charity money Duncan stole from Sally? #corrie”

Another added: “Lewis puts £40k in gails bank next week.. Sally is accused of stealing£40k surely not a coincidence Lewis will be working with Duncan #Corrie”

Do you think the money is all connected or did the show just get lazy?  Leave us a comment on our Facebook page @EntertainmentDailyFix and let us know what you think!