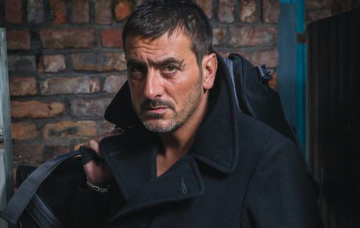 One's a legend, one starred in Pirates of the Caribbean

If you’re going to meet a famous Hollywood A-lister, there are a few basic rules. 1: Make sure you look hot. 2. Have a camera handy to capture the moment forever.

The soap star, 51, has shared a throwback photo of the time he met Pirates of the Caribbean’s Johnny Depp, 55, and he very nearly out-cooled the famous actor. Not quite, but almost.

Chris, who plays Peter Barlow in the ITV soap, only recently joined Instagram and couldn’t resist posting a snap of when he met Johnny.

Johnny is seen with notorious tattoos, plenty of metal jewellery and his trademark Fedora-style hat. Chris, meanwhile, looks chuffed to be pictured with the star, and is holding a bottle of beer while resting an unlit cigarette between his lips.

Although Chris did not write a caption – he’s still new to it! – fans knew the snap was historic as Chris is missing his salt and pepper beard.

Some of his 14,700 followers were quick to comment on the black and white photo, with one saying: “Wait… Is Johnny making a cameo on Corrie!?”

Another gushed: “You are seriously hot.”

A third added: “My favourite Corrie actor and so much better without the long beard!”

“That’s one night out I would have liked to have been on,” said another, while one more joked: “Man sandwich anyone?”

Although we think Johnny would make a fine addition to the Corrie cast – just imagine him propping up the bar in the Rovers!? – there are no current plans for the Alice in Wonderland star to arrive in Weatherfield.

While Chris clearly has important friends, his character Peter needs as many pals as he can get at the moment.

He recently checked himself into a private rehab clinic to battle his demons, however he checks himself out this week in a bid to help Carla, who is psychotic and in danger.

Which famous person would you most like to see on Coronation Street? Leave us a comment on our Facebook page @EntertainmentDailyFix and let us know what you think!