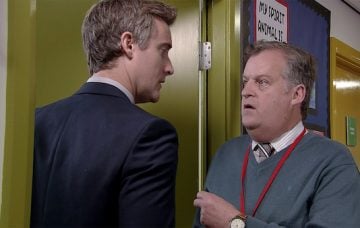 Things went from bad to worse this week...

School teacher Brian Packham has been the subject of an uncomfortable and unpleasant campaign of hate by deputy headteacher Phil Gillespie – and the workplace bullying took a darker turn on Wednesday.

Last night (12 December), things went from bad to worse for Brian when he finally plucked up the courage to tell Bessie Street’s head teacher that Phil has been making his life a misery.

And while it looked promising to start with, viewers later saw a vengeful Phil vow to make Brian’s life a misery after calling him out with his boss…

Things are set to get a whole lot more sinister for the teacher, but fans have been quick to criticise the plot for what they believe to be a huge plot hole.

Why doesn’t Brian just get Phil’s hateful comments on tape?

Fans have been left frustrated and shouting at their TV sets as they’ve watched Phil mercilessly bully Brian, so that he’s become so stressed it’s affecting his health and his relationship.

Things came to a head when Cathy found the caffeine pills in Brian’s coat that he’s been using to self-medicate and keep himself awake after working such long hours.

Convincing him to go to a doctor, he was diagnosed with worrying heart palpitations.

With Cathy’s support, Brian then decided to go to headmistress Melinda and tell her the truth – and ITV viewers were relieved to see Brian finally stand up for himself.

But later, in the Rovers toilets, Phil confronted Brian and called him incompetent and an imbecile. He threatened him never to talk to Melinda about it again.

As Phil declared his evil intentions to step up his horrible behaviour towards Brian, exasperated fans took to Twitter with their simple solution to Brian’s problem.

Brian needs to buy a voice recorder I am sure, then catch that man at his bullying worse. I know from experience what bullies are like. #Corrie

All Brian needs to do is get a voice recorder hidden on himself to record what is being said to him by that guy. #Corrie

Ignore him .. Brian .. take notes and try to record everything.. Don’t be intimidated by him.. it will get to a stage, in the future, when his back‘s against the wall and he will accuse you of bullying him.. trust me, that’s what they do. #corrie

What is going on with #Corrie ? Such stupid story lines currently, with all the humour gone. The Brian story is poorly researched …..along with Hope too.

Why is Brian so naive after all those years he spent in teaching?
It's nonsense. #corrie

One wrote: “He should secretly record what he says and take that to the Head.”

Another agreed, saying: “Record Phil and get him sacked, Brian your so much better than him rise above it.”

A third added: “He should let him bully him more & then make a recording that will sort him out.”

“Record him Brian, then take it to the police as this is harassment, and bullying,” stressed another.

“Well, being the modern Coronation Street, he certainly won’t do the sensible thing,” lamented another. “He absolutely won’t tell Cathy either – standard Corrie storyline…..in trouble? Don’t tell anyone.”

Some fans branded Brian “gullible” and “naive” and begged him to stand up to the bully.

What do you think Brian should do about his workplace bullying? Leave us a comment on our Facebook page @EntertainmentDailyFix and let us know what you think!