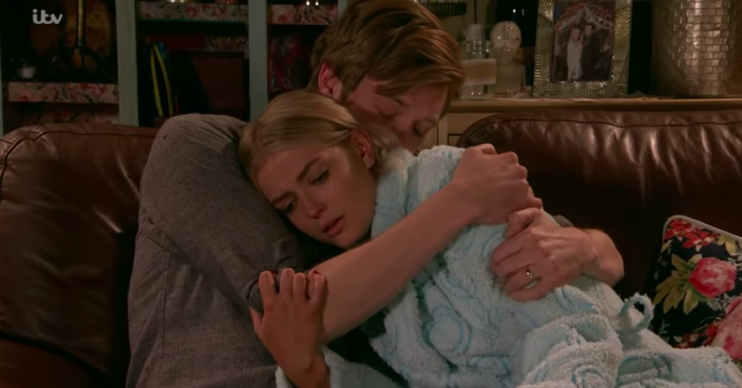 The heartbreaking scene had fans in tears

The waitress got caught in the rain with Sinead’s widower Daniel after he was attacked by Gary Windass and they went back to his to dry off.

Bethany got out of her wet clothes and had a shower while Daniel fell asleep on the sofa.

And by the time he came too he thought he saw his late wife Sinead back alive and entertaining their son Bertie in front of the fire.

He even saw her singing to him as he woke up, but it all became clear that he was hallucinating her and it was in fact Bethany.

Viewers were horrified at Bethany wearing the late cancer victim’s clothes in front of Daniel and Bertie.

They took to social media to hit out at her.

One said: “Are you serious??? Would you wear his dead wife’s dressing gown?

“She is barely out of the picture.”

A second said: “Why was Bethany wearing Sinead’s dressing gown. I find that disrespectful tbf… #coronationstreet.”

A third said: “Not sure it was right for Bethany to put on Sinead’s dressing gown without asking…. #Corrie.”

A fourth even likened Bethany to a stalker and said: “Ew. Are we meant to have any sympathy for uber hard-faced Bethany, wearing a freshly-dead woman’s dressing gown and making herself at home?

Did you think Bethany’s behaviour was disrespectful? Leave us a comment on our Facebook page @EntertainmentDailyFix and let us know what you think!