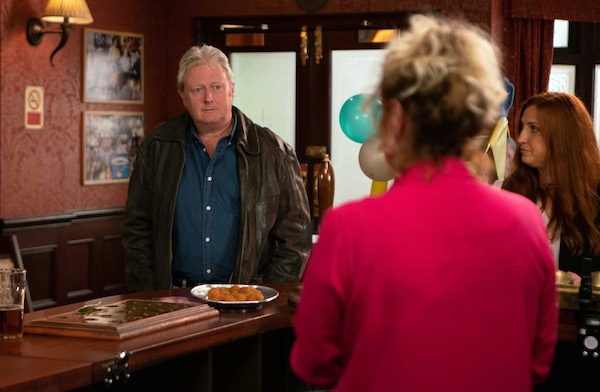 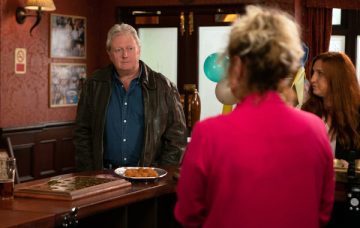 Jim was serving time in prison after a botched attempt at an armed robbery in 2011.

He told his gobsmacked son that he’d been released, quipping: “You don’t think I could have got over the wall in a state like this?”

Jim hobbled into the pub walking with a cane due to his condition myotonic dystrophy.

Corrie fans took to Twitter to express their joy at Jim’s release from the Big House.

Jim McDonald what a lad!

Awk I’m happy to see big Jim McDonald back on Coronation Street so I am.

But while fans were ecstatic to see Jim back in the Rovers, the reaction he got from the locals wasn’t quite so overwhelming.

Peter Barlow tried to attack him after Jim poisoned him with illegal alcohol while they were both in prison in 2014.

A furious Steve stormed out of his own stag party after telling his dad that he’s nothing to him.

It was left to Jim’s ex-wife Liz to break the news that Steve has split from Michelle Connor and is now marrying Tracy Barlow.

“Why in the name of God is Steven marrying the anti-christ?” Jim pondered. Which is something most of us have been wondering.

Jim’s return has been eagerly anticipated since it was announced earlier this year that actor Charles Lawson was returning to the role that made him famous.

He hasn’t returned alone either. Jim will be accompanied by a young woman called Hannah who he will reveal is the daughter Liz believed to have died when she was a baby in 1992.

Jim will explain that there was a huge mix up at the hospital and that their daughter, who they called Katie, actually survived and was adopted.

But while Liz embraces her daughter’s return from the dead, Steve and Tracy aren’t quite so convinced and look into Hannah, discovering she’s not who she says she is.

Could Liz be set for even more heartbreak if Hannah is unmasked as a fake?

Were you pleased to see Jim back on the cobbles? Leave us a comment on our Facebook page @EntertainmentDailyFix and let us know what you think!