David Platt and Shona Ramsey could have been murdered, Coronation Street fans fear.

In last night's episode a hooded figure broke into the Platt family home just after David and Shona retired to their bedroom.

However, the ominous character's identity was not revealed - but fans were certain there could be serious consequences for the residents of Number 8.

Taking to Twitter, one fan said: "I bet it’s Clayton!" 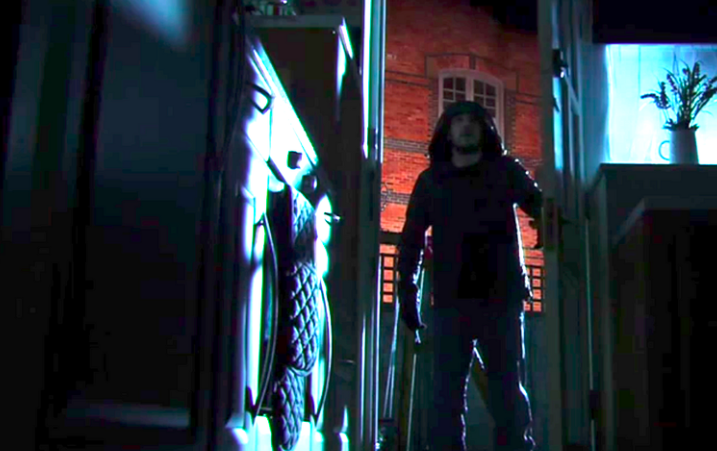 The hooded intruder could kill David and Shona (Credit: ITV)

A second said: "All the couples are being cute tonight but it’s not looking good for David and Shona in the morning!

"I wonder how the intruder managed to find out where she lives anyway? Does Clayton even know about who his mum’s dating? #corrie".

Harking back to mum Gail's serial killer ex, another suggested David and Shona could be in deadly trouble.

"The curse of Richard Hillman is on that house," they tweeted.

The intrusion came after Shona discovered there was no way she could get Clayton moved prisons after all he had done.

A known criminal, the scoundrel violently stabbed Kylie Platt to death on the cobbles in 2016. Has Clayton come to kill his mother? (Credit: ITV)

It sparked a dramatic storyline that saw David try to murder Clayton by blowing up the court at the trial with a car full of petrol.

But he later fell in love with Shona Ramsey not knowing she was Clayton's mother.

Now the couple are even able to discuss Clayton without David turning murderous and in last night's episode he told Shona he was OK with her helping her son.

He said: "Listen, I'm not going to stand in the way if you want Clayton moved. If that's what it takes to keep him alive.

"I spent all day convincing myself that I'd be OK with the idea if he was in an open prison then I'd be able to support you."

Who do you think has broken into the Platts? Leave us a comment on our Facebook page @EntertainmentDailyFix and let us know what you think!