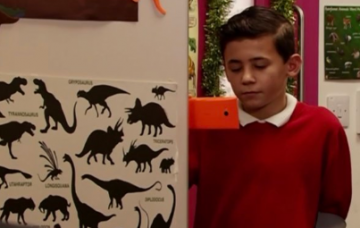 Corrie fans celebrate as bully Phil is exposed by Jack

Phil was suspended for his foul treatment of Brian...

Coronation Street fans did a collective victory dance last night, when bully Phil Gillespie got what he deserved – and not before time!

Twitter went wild with people heralding Jack as a “legend” and a “hero”.

We’ve watched in horror as poor Brian Packman has been subjected to a cruel campaign of intimidation and bullying by Phil, who has threatened him if he tells anyone.

And it all came to a dramatic head when the day of the nativity finally arrived.

In the double-bill, Phil told Brian to go home on the day of the school play despite all the hours Brian had put into organising it.

Read more: Norris Cole return to Corrie is only a temporary one

A dejected Brian went to the Rovers to drown his sorrows in tequila, but later decided to turn up at the play a little bit sozzled.

This was when Phil grabbed his opportunity to shame Brian in front of all the parents and fellow teachers, by hooking him onto a mechanical lever which hoisted him into the air.

Poor Brian ended up being sick all over the governors and head teacher.

Later, the pair had a confrontation in which Phil spilled out a lot of nasty bile, vowing to get Brian sacked…

And fans were thrilled when young Jack stepped forward, having filmed the entire outburst on his phone.

In one of the most satisfying moments on TV, he then uploaded the film on to the school website leading to Phil’s suspension!

Fans couldn’t be happier, with one simply saying: “Nice one Jack!”

Another wrote: “Omg little jack is a legend #corrie.”

Only time will tell if Phil tries to get revenge on Brian… But, for now, we’re all enjoying his downfall!

Do you think it was a satisfying end to Phil’s reign of terror? Leave us a comment on our Facebook page @EntertainmentDailyFix and let us know what you think!