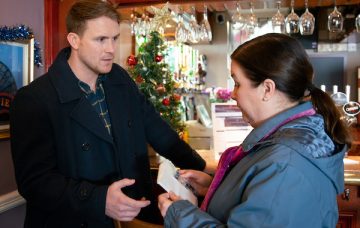 Corrie fans baffled by Jude’s new accent as he returns

So, he's called Ken Barlow now and is Irish?

Mary Taylor finally tracked down her son Jude Appleton last night, but it wasn’t the uplifting family reunion she was hoping for.

While fans gave up hope on compulsive liar Jude some time ago, loyal mum Mary still believed she could help him.

In emotional scenes on Wednesday (2 January), however, even Mary had to admit he was beyond help, as she made the difficult decision to leave him behind in his web of lies and head back to Weatherfield without him…

But not before one of the weirdest encounters possible!

With the help of a private investigator, Mary and loyal gopher Roy tracked Jude down to a B&B in Blackpool…

After driving down there, Mary got the reward she was hoping for when she found her son at last.

Read more: Corrie fans heartbroken for Audrey after robbery – but is her grandson to blame?

Viewers saw Mary begging Jude to come home, but he told her he couldn’t because he owed the B&B owner money.

As a gullible Mary headed off to find a cashpoint, we saw Jude turning to a blonde – his new girlfriend Kelly – and painting himself as a surgeon.

Even telling her that Mary was one of his patients!

As well as the cringe-worthy lies, fans were shocked as Jude called himself Dr Ken Barlow and showed off a totally new accent!

With a collective raised eyebrow and incredulous smirks, fans converged on Twitter to remark on Jude’s bizarre new persona…

Actually, Jude’s quite funny in an awful kind of way. #Corrie

He's got a fake accent too 🙈🙈 #Corrie

And now Jude is putting on a fake accent😂😂 #Corrie

Nah mate Jude is out of control wtf…. HES EVEN PUTTING AN ACCENT ON😭😭😭 OMG HE IS CANCELLED @itvcorrie #corrie

Another said: “Jude’s been to Fake Accent University.”

A third said: “Jude seeming to do a parody of Jim McDonald’s accent.”

“How and why did Jude come up with the idea to put on a irish accent,” questioned another.

In fact, Paddy Wallace was talking in his REAL accent as the actor was born in Belfast and raised in Northern-Ireland. There’s a clue in his very Irish-sounding name!

Someone better tell Mary what Jude's up to, and quick!#DrKenBarlow #Roy #Jude #Mary #Corrie pic.twitter.com/gZX1hMPC4x

In the end, Jude ran off with Mary’s cash, leaving Mary to find out that he’d taken advantage of her once again.

She told Roy: “At least he’s alright. He’s healthy and he’s got a bit of money in his pocket. I always dreamed of meeting my son, and then one Christmas I did. But I have to be honest, he’s not the son I’d hoped he’d be.”

The episode closed with Mary’s realisation that she’d never see Jude again, before belting out ABBA’s Fernando as they set off home.

And did you know, in real-life, Paddy is 39. And his on-screen mum Patti Clare is only 42!

Will you miss Jude? Leave us a comment on our Facebook page @EntertainmentDailyFix and let us know what you think!