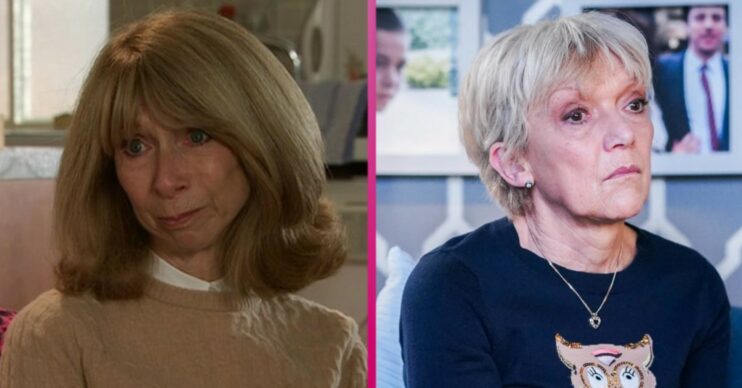 Corrie, EastEnders and Emmerdale characters that need more scenes together

One of the benefits of soaps is that viewers get to watch their favourite characters interact with their friends and neighbours for years in Corrie et al.

However, it doesn’t always work out and sometimes the bosses of Coronation Street, Emmerdale and EastEnders forget to keep pals in touch.

Even enemies can light up a screen when they’re together.

So here’s five sets of characters who we think need to have more scenes together.

Emmerdale fans would never think that Charity and Kim missed each other by a matter of months the first time around.

With Kim gone, there was a soap superbitch vacuum in the Dales – one that Charity learned to fill.

She married Chris Tate, had his baby, had an affair with his sister and then almost got framed for his murder by the man himself.

She’s scammed, cheated and schemed her way to riches, back to rags and even once found herself chained in a metal container for her misdeeds.

But she’s only clashed with Kim on a handful of occasions.

While Kim is a force of nature, Charity could more than hold her own – if she was allowed to.

Time to unleash these two villains and let them decide who’s the worst once and for all.

Over the years Gail and Eileen have had some incredible clashes.

First there was the “and here’s the rest of the Village People” outing of Todd by Gail after he knocked up Sarah.

Then there have been clashes over David, Lewis and most memorably rolling about on the cobbles over Les Dennis.

But despite their shared interests of serial killing husbands, the pair haven’t shared so much as a snarky insult in years.

And that has to change.

Ignoring the pandemic, it’s been a long, long time since Shirley and her best mate Jean shared more than a quick coffee in EastEnders.

Rough and ready Shirley and slightly kooky Jean have always been an odd pairing – but it was a friendship that worked.

Recently Shirley lent a hand with Jean’s accidental drug factory problem and they shared scenes for the first time in months.

And it’s reminded us about how utterly brilliant the two of them are together.

Shirley needs her friends around her – and Jean needs back-up for when she takes on the likes of Suki Panesar.

Bring them back together and give the fans what they want.

It’s another mention for Kim but it’s an essential one.

A villain of Kim’s stature only works if she’s being humanised whenever possible – and one of the only ways to do that is to have a kind character be her friend.

At first it was Seth Armstrong, and he made Kim seem human and more rounded by their touching friendship.

But with Seth long gone, in this stint it has fallen to Lydia Dingle to be Kim’s confident – and cleaner.

She is able to help get through to Kim when no one else can – and puts her own self-interest last to make sure Kim is OK.

Kim might fire her frequently – but it never lasts and their friendship is the one thing keeping Kim tethered to reality.

There needs to be more of it or she risks becoming a caricature of herself.

And then there were three.

The elderly statesmen of the cobbles, Ken, Rita and Audrey go back decades.

But aside from a mutual friend’s funeral – they rarely interact.

Corrie has always excelled when it acknowledges its long history – and those of its characters.

With a combined 160 years on the cobbles – there’s an awful lot of history between these three.

And we’d love to see more of it explored.