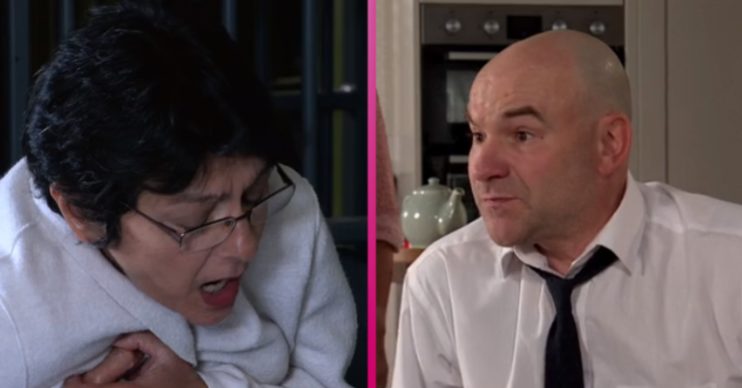 Yasmeen collapsed and Tim thinks she's got the virus

For months the pandemic hasn’t been referenced on the soap – but overnight, things changed.

While on Wednesday some scenes featured social distancing, it wasn’t mentioned and in Friday night’s episode, the virus entered Weatherfield.

Social distancing is now standard in the soap and has been seen on screen for the first time.

At the beginning of the episode, Gary Windass said the “whole world’s changed” in an apparent reference to coronavirus.

But it wasn’t until Yasmeen Nazir collapsed in prison that the dreaded word was mentioned on the cobbles.

It was the first day of her trial and because of her collapse, it was pushed back while she was treated in hospital.

However her son-in-law Tim Metcalfe insisted that her suspected heart attack was “probably that coronavirus”.

There were also multiple references to more wildlife being around the cobbles and Weatherfield in general.

However for viewers, the direct and indirect mentions of the virus were too much.

One said: “Also how many times did #corrie mention Coronavirus last night??? STOP THAT.”

A third tweeted: “Ok we get it, coronavirus reached Coronation Street #corrie.”

Someone else said: “I notice it’s suddenly become Coronavirus Street overnight. Everyone is suddenly talking about it, yet no one has a mask.”

Not quite as good as Bouncer’s Dream. And I notice it’s suddenly become Coronavirus Street overnight. Everyone is suddenly talking about it, yet no one has a mask #corrie

The edition marked the first time a full episode of the soap was produced under the new guidelines.

They have also banned kissing. And the soap’s first socially distanced stunt will air next week.

In upcoming scenes Sarah will discover that Gary murdered Rick and rushes to tell the police before he can stop her.

But as she races off with Gary chasing her, she ends up in the path of a car and looks set to die before she can tell anyone what she knows.

However in a shock twist Gary will dive in and push Sarah out of the way.

Due to filming restrictions banning cast contact, the soap had to replace actress Tina O’Brien with a dummy.

The stunt was originally due to film on location. However bosses changed it in the interest of safety for the cast and crew.