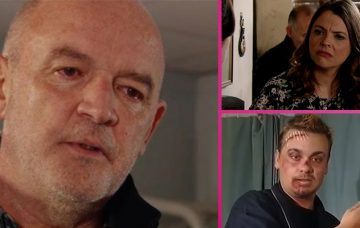 Corrie's has it's fair share of serial killers and nasty pieces of work, but who's been the worst?

Coronation Street has had more than its fair share of villains during its 58 years on our television screens.

But who was the worst of the lot?

Pat Phelan is hard to beat after his reign of terror over the last few years. But what about Richard Hillman, Tony Gordon, and Alan Bradley?

There’s been some pretty terrifying people living in Weatherfield. Here’s a look at the worst.

There’s no denying Pat Phelan was a nasty piece of work, and his reign over the residents of Corrie over the last few years had some viewers complaining the show was just too dark.

He raped Anna Windass, set up a dodgy property development scam with Vinny Ashford, left Michael Rodwell to die, and kept Andy Carver hostage in a basement for months.

Phelan then forced Andy to kill Vinny, before killing Andy himself and throwing the bodies into a lake.

When his evil acts were discovered, wife Eileen pushed him off the docks into the sea, but he returned weeks later wielding a gun and shooting his daughter Nicola Rubenstein, and then Michelle Connor at her own wedding.

A returning Anna Windass stabbed Phelan and he died, bringing his time on the Street to a firm end.

Alan Bradley was with the cast of Coronation Street from 1986 to 1989 and he targeted Rita Fairclough in a vicious campaign of terror.

He dated her after she fostered his daughter, Jenny Bradley, and wanting to get his hands on her cash, he took a mortgage out on her house by posing as her late husband Len Fairclough.

Rita found and he beat her to almost death to silence her. He was arrested, but only served a few months in prison before being released and starting to harass Rita.

Rita fled to Blackpool, but he hunted her down and in one of the most iconic soap scenes ever he chased her in front of a tram and was knocked down and killed by it. 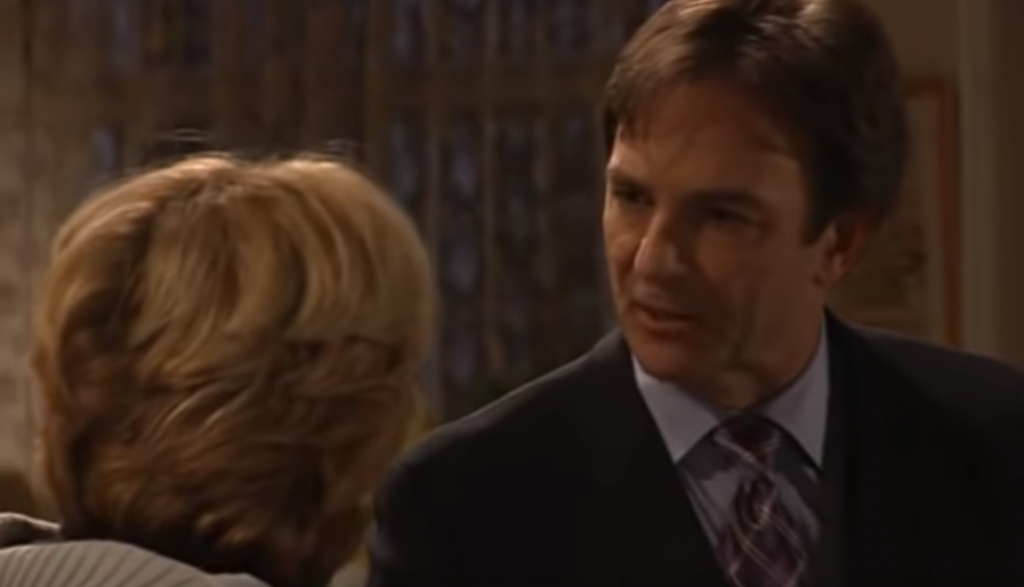 Described by wife Gail as “Norman Bates with a briefcase”, Richard Hillman had the entire street fooled with his nice guy act.

But what she didn’t know is that her successful financial adviser hubby was actually in mountains of debt and had a very shady past.

He was responsible for three deaths – Duggie Ferguson, Patricia Hillman and Maxine Peacock. He also attempted to kill Audrey Roberts.

He eventually kidnapped Gail and her kids David and Sarah Platt and drove them into the canal in a bid for them to all die together. Fortunately, they survived and he perished.

Tracy Barlow might be playing the happily married wife to Steve McDonald and mother to Amy McDonald these days, but let’s not forget she’s also a killer.

A moody teen, who spent most of her youth playing tapes in her room, she left Weatherfield after getting married, but she returned in 2002 having left her husband (Robert Preston).

She was responsible for drugging Roy Cropper and convincing him they’d slept together and he was Amy’s dad, and she ruined Karen and Steve’s wedding, but her worst act was to come when she found out Charlie Stubbs had cheated on her and plotted to murder him.

She went to prison for 15 years, but a mis-trial was declared three years later and she was released.

Since she returned for good in 2009, Tracy has dated killer Rob Donovan, later going on the run with him, scammed Liz McDonald, started a fire and let Carla Connor take the blame, and ruined countless of Steve’s relationships. She’s now playing the good wife, but for how long?

Much like Tracy Barlow, David Platt is currently a good family man dealing with the terrible trauma of being raped. But it wasn’t always this way, he even won Villain of the Year at the 2008 British Soap Awards.

The incident with Richard Hillman sent David off the rails and he spent most of his teens tormenting mother Gail, sending her cards from deceased Hillman and eventually pushing Gail down the stairs.

After plenty of other incidents including putting niece Bethany in hospital and staging a suicide attempt, David’s family eventually disowned him when he caused brother Nick Tilsley to have a car accident that left him brain damaged.

He was later forgiven and has turned over a new leaf. But that doesn’t stop him attempting revenge on anyone who does him or his family wrong.

Don Brennan was a regular on Corrie for 10 years from 1987 to 1997, and was largely inoffensive until his final year on screen.

He had gambling problems and developed a feud with Mike Baldwin, kidnapped Mike’s wife, Alma, and tried to kill both her and Mike.

Don was killed when he tried to drive his car at Mike and instead crashed into the viaduct wall and the vehicle burst into flames.

The former partner of Tyrone Dobbs and mother of his daughter, Ruby, Kirsty physically abused Ty and then set him up as the abuser.

She arrived in 2011 and made Tyrone’s life a living hell, hitting him and leaving his name off Ruby’s birth certificate so he’d be forced to stay with her.

Ty eventually got away and started up a relationship with Fiz Stape, but Kirsty vowed to make him pay by saying he was abusing her.

When Tyrone was in court, Kirsty snapped at Julie Carp and hit her too, before realising she needed to tell the truth. She went to prison and upon her release left the country.

Tony Gordon was engaged to Carla Connor, but was a bully who couldn’t handle the fact she was actually in love with her brother-in-law Liam Connor, so had him killed in a hit and run.

He evicted Jed Stone and then tried to kill the old man, before confessing his crimes to Carla, who fled town in fear.

He then got engaged to Liam’s widow, Maria Connor, but Carla returned to stop him, although he scared her into leaving again.

Tony confessed his crimes to Roy, thought about killing the cafe owner, and then handed himself into the police. He went to prison, but escaped and turned up at the factory, holding Hayley, and Carla hostage before setting Underworld alight. Carla and Hayley got out, but Tony perished in the blaze.

Josh Tucker was responsible for one of the most harrowing storylines of 2018 when he drugged and raped David Platt.

At first the pair were mates, but Josh crossed many many lines when he slipped something into David’s pint and then led him to the bedroom when he was unable to say no.

It was later revealed Josh had done it before – and was about to do it again. But Billy Mayhew warned Josh’s next victim, who beat Josh to a pulp.

Jez Quigley was on the Street from 1997 to 1999 and he murdered Tony Horrocks before burying his body on a building site.

He was a drug dealer who gave Leanne Battersby cocaine, had her beaten up, and then became enemies with Steve McDonald after Steve testified against him in court.

He nearly killed Steve and was then beaten up by Steve’s dad, Jim McDonald.

Jez tried again to murder Steve in his hospital bed, but Jez’s spleen ruptured and he died.

Kylie Platt’s ex-boyfriend and Max’s real dad, drug-dealer Callum got Kylie back into drugs when they reconnected in 2014.

Callum went round beating up several locals including Jason Grimshaw.

He started a relationship with Sarah Platt, but when he tried to attack her Kylie came to her rescue and hit him over the head with a wrench.

Along with David, they hid Callum’s body, but when it was discovered a recently deceased Tony Stewart was blamed for the murder.

Carla’s brother arrived on the street after being released from prison in 2012.

At first he was trying to go straight, but things soon turned when he murdered Tina McIntyre.

After letting Peter Barlow go down for it, Rob eventually confessed to Carla, who shopped him to the police.

Rob went to prison, but escaped in 2017 to go on the run with Tracy – only to be caught again and sent down for good.

Nathan Curtis befriended Bethany Platt in 2016 and it soon became clear he was grooming her for a paedophile ring.

Bethany eventually realised her fiance was not a good guy and managed to escape him as they prepared to flee the country so he could sell her on to some associates abroad.

Nathan and his cronies were arrested and sent to prison for what they’d done.

A hapless villain, but a villain nonetheless, Fiz’s husband John Stape ended up being a serial killer before he died in 2011.

Teacher John had an affair with teenage Rosie Webster, causing him to lose his job and go off the rails.

He stole his dead friend, Colin Fishwick’s identity, killed Charlotte Hoyle during the tram crash in 2010, and caused Colin’s elderly mother to have a heart attack and die.

He held Chesney, and Charlotte’s parents hostage and when Fiz discovered everything she handed him into the police. He escaped and was later involved in a car accident and died from his injuries.