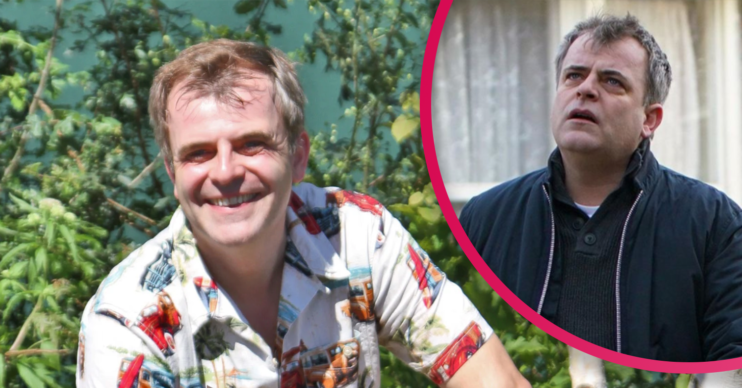 The soap star gave an insight into life beyond the cobbles

Soap actor Simon Gregson has given fans a glimpse into his average weekend as he welded with his dad.

The Coronation Street star – who is best known for playing Steve McDonald – shared two snaps alongside his father on Twitter yesterday (July 5).

The photos show Simon and his dad dressed in protective gear while tackling a long metal object in the shed.

The 45-year-old captioned the photos: “Sunday is son and dad welding day.”

Simon’s fans were delighted to see exactly what the star gets up to beyond his cobbles character.

One joked: “Jim McDonald has changed. For the better I may add!”

Another said: “Why, Simon? Couldn’t you get Kevin Webster to do it for you?”

A fourth pitched the idea for an interesting TV show, writing: “There is a TV show to be made with the two of you in that shed without a doubt!”

Simon has been busy keeping followers updated on life in lockdown on Twitter.

In April, fans labelled him a hero after he gave away a classic car and motorcycle to NHS workers.

The soap star made the decision as he wanted to show his appreciation for the UK’s health service after battling coronavirus himself.

He wrote on Twitter: “Dear NHS workers I have two classic projects (car and bike) if you ride or drive and like fettling old machinery there yours. Just a little thank you. They need work! But don’t we all. No delivery for obvs reasons oh and thank you.

“The other is a 1955 1 owner Francis Barnet kestrel 30c again needs work. I’d like these to go to people on the front line who deserve a gift for their tireless efforts [sic].”

Last month, Oasis singer Liam Gallagher revealed he had a secret feud with Simon for decades.

Talking about the incident in Manchester near the former Corrie studios, Liam described the altercation that started it all.

He told The Sun: “We performed Take Me at Granada TV Studios. After we did it, we thought we were amazing and we thought we’d go for a pint and the guy who is in Coronation Street, Steve McDonald, I was walking down the road with my jacket on and he’s come out and he’s staring at me and I’m staring at him and he’s giving me looks back and I’ve gone, ‘What you [expletive] looking at?’

“And he’s wound down his window and flipped the bird at me and then I’ve chased him down the road.

“And he wound his window up and drove off and I kept catching him at lights.

“He was coming out of the Granada TV studios where they’d been doing Corrie and we had just been making our TV debut with Take Me and he [expletive] flipped me the bird. Can you believe that?”