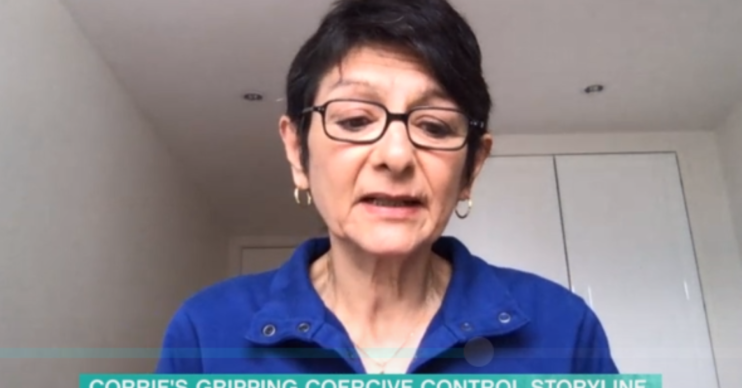 Lockdown has halted filming which will affect the storyline going forward

Coronation Street actress Shelley King has admitted the ending to the Geoff and Yasmeen abuse plot may change due to filming restrictions.

Coronavirus lockdown halted production on all UK soaps back in March.

The networks are looking at ways they can resume filming, while still sticking to social distancing guidelines, and Shelley has revealed she’s unsure if some of the content they’ve already shot will be put forward to air.

How will the Coronation Street Yasmeen plot end?

Speaking to Eamonn Holmes and Ruth Langsford on This Morning on Friday (May 1), Shelley was quizzed about pictures that had shown the cast filming at court.

“To be honest, I don’t know just how much of that bit we’ve already filmed is going to go forward,” Shelley said.

“Because we were stopped in mid-stream on the 23rd and it’s going to be very difficult. It depends on what we’re allowed to do with government restrictions as to whether we can go on, so I don’t know whether what you’ve heard has been filmed will go on.”

It had been speculated Yasmeen will end up in court on an attempted murder charge after she hits back at abusive Geoff in tonight’s special episodes.

I don’t know just how much of that bit we’ve already filmed is going to go forward.

As a tortured Yasmeen desperately tries to defend herself, she ends up hitting Geoff with a bottle.

He is left unconcious on the floor and Shelley admitted the incident is a complete blur for her character.

“I wouldn’t call it retaliation,” she explained.

“This started two years ago. It’s been a slow drip and gradual escalation of abuse, so it’s not an attack, she’s defending herself, it’s instinct.

“She’s a cornered animal and all she does is defend herself. She doesn’t even know in that instance what has actually happened to her.”

Read more: Coronation Street’s Adam to be killed off?

She continued: “We, in order to survive cannot remember the pain we’re feeling. The incident is blurred so all Yasmeen is thinking of in the scene we see tonight is her survivial.

“She’s in deep shock, she really can’t remember what happened. All she can remember is Geoff and her being there, Geoff coming for her, the abuse continuing, and then he’s on the floor.”

As Yasmeen calls the police on herself, she will be charged with attempted murder next week.

But will Geoff’s abuse finally be exposed?