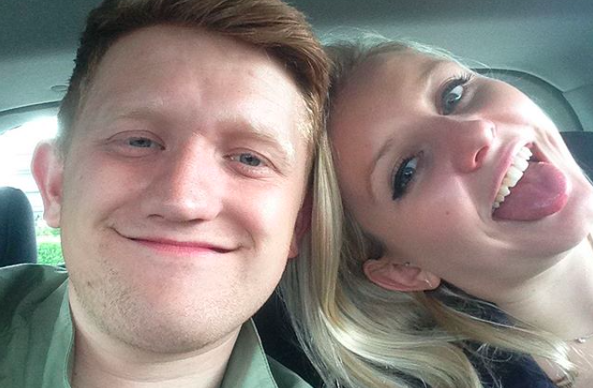 The couple married in Cheshire over the May bank holiday weekend

Although no pictures of the big day have emerged yet, his new bride has been sharing intimate snaps from their honeymoon.

Celebrating one week since they said ‘I do’, Briony shared a snap of the two of them having cocktails on their Maldives getaway.

1 week of being husband and wife✨

Some of Sam’s former cast mates commented on the snap with Bhavna Limbachia, who played the late Rana Habeeb, saying: “Congratulations guys.”

Tisha Merry, who attended the ceremony as the plus one of Alan Halsall, officially confirming their relationship, commented: “Gorgeous.”

Other fans were also quick to comment: “Looking so happy together,” said one.

Briony has shared a number of other stunning snaps from their trip.

The couple married at Stock Farm in Cheshire last week surrounded by family and friends, including Sam’s Coronation Street co-stars, before jetting off to a luxury resort in the Maldives.

And while Sam has clearly been enjoying wedded bliss and a break away from social media, Briony couldn’t resist sharing some pictures from their loved-up holiday.

Staying at the same resort that TOWIE star Billie Faiers married in, Briony shared a sun-drenched photograph with her 6,114 Instagram followers combining two of her favourite things…

The yoga teacher shared an incredible shot of her in a flexible position, bending backwards over her new hubby while kissing him.

And we’re exhausted just looking at it!

The backdrop of a pristine aqua sea makes the scene perfect.

Briony also shared one of herself striking a pose in a pink bikini, alongside which she wrote: “Married. Maldives. Magic.”

Many of her fans sent well wishes, with one saying: “Just beautiful!!! Congratulations you beautiful pair.”

Another said: “Looks amazing, what a beautiful photo, have the time of your lives.”

Meanwhile, a third photo gave us a glimpse of what their view is like in the evenings – and it’s stunning.

While the newlyweds are clearly having a beautiful time, they’ve had some sad news over the past few weeks.

On the day after their wedding, they were left distraught when their beloved dog died.

Briony shared a picture of the pooch on Instagram stories and wrote: “Today we lost another member of our herd. Sweet dreams buddy.

“Now you can lick every cushion in the sky. Sam I are so lucky to have each other through good times and bad thank you for the love.”

Sam and Briony’s devastation came just weeks after they lost another one of their adorable four-legged friends, black Labrador Bella.