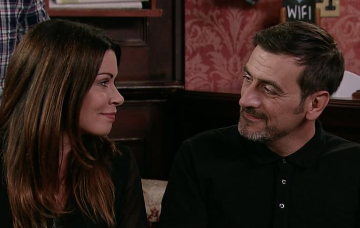 Coronation Street’s Peter and Carla: The history of their relationship

Is there a special Christmas reunion on the cards for Corrie's favourite couple?

They’re the cobbles; answer to Romeo and Juliet. Kind of. And hopefully without all the death. And with Carla Connor and Peter Barlow growing close again this new year, what better time to take a look back over the relationship of Weatherfield’s star-crossed lovers?

It all started when factory owner Carla Connor fell for the charms of Peter Barlow. Despite the fact he was dating her best friend at the time, Leanne.

Carla’s love for Peter was unrequited though as he was devoted to ‘Lea’. And also to alcohol.

Peter helped Carla as she battled her own booze demons after being arrested for drink-driving.

Before long Carla confessed to Peter that she had feelings for him and hadn’t felt this way about a man since Liam Connor – another questionable choice considering he was her brother-in-law.

Peter rejected Carla to marry Leanne and Carla became involved with creepy Frank Foster. They got engaged but Carla called it off before long, realising he would never fill Peter’s shoes.

Everything changed when Carla was brutally attacked by Frank – who thought she was having an affair with Peter.

A devastated Carla attempted to take her own life after the rape and it was Peter who brought her back from the brink.

He realised that he had feelings for her and the pair eventually began an affair behind Leanne’s back.

Frank found out about the fling and it was revealed in court when he was on trial for rape. The reveal helped Frank get acquitted for raping Carla. But he paid for his crime when he was murdered by his own mother. Although Peter took the blame when Carla was the prime suspect and confessed to killing Frank.

After confessing – under oath we might add – that he was in a relationship with Carla, things got pretty ugly for Peter. Carla moved into Peter and Leanne’s flat with Peter’s son Simon.

Simon was furious and didn’t like Carla, eventually moving back in with adopted mum Leanne following a custody battle.

Peter planned to take Simon away from Leanne and run away with him and Carla but Carla warned Leanne what Peter was planning.

Instead Peter and Carla set off on a cruise around the Caribbean and lived in LA for a while before returning to Weatherfield months later.

Carla and Peter married in 2013, but it was never going to be a happy ever after as Peter’s eye had started roving even before the vows were said.

Rovers barmaid and the only other female who could match Carla for sexiness and feistiness Tina McIntyre developed a crush on Peter when she began babysitting Simon.

And Peter was more than flattered by the attentions of a beautiful, younger woman and sparks flew between the pair.

They ended up giving in to their feelings and snogged the faces off each other – on Peter and Carla’s wedding night.

Carla had passed out drunk in the hotel room while Peter got to grips with Tina at the deserted reception.

After that Peter and Tina began sleeping together whenever they could. But Tina fell in love with Peter and didn’t want to be his bit on the side anymore. She gave him an ultimatum – tell Carla or finish things with her.

Peter promised Tina that he’d tell Carla but after going back on his word several times, she became convinced he was never going to leave his wife. Peter told her they could run away together and Tina packed her bags, revealing to Rita that she had been seeing Peter.

But Tina was left gutted when she walked into the pub to find Peter announcing that Carla was pregnant. Tina confronted Peter and scratched his face.

All over for Peter and Carla?

Tina told Peter that she would tell Carla about their affair which lead to her being murdered by Carla’s brother Rob Donovan to keep her quiet.

Unfortunately Peter already confessed to Carla that he’d been sleeping with Tina and the stress of the situation caused her to have a miscarriage.

Peter was arrested for Tina’s murder and Carla believed he’d killed her until she visited him in hospital – where he was after suffering from alcohol poisoning – and he told her he’d keep her secret til the day he died. Carla realised that Peter was innocent and that he thought she’d killed Tina.

Carla worked out it was Rob that had killed Tina and reported him to the police – unable to let Peter serve a life sentence for a crime he didn’t commit.

When Peter was released from prison he tried to win Carla back but when she told him it was never happening he moved to Portsmouth.

Carla went on to marry Nick Tilsley but the marriage didn’t last and she ended up leaving Coronation Street too.

When Carla collapsed in the Rovers it was clear that Peter still had feelings for her – which didn’t go unnoticed by Toyah.

Following Aidan Connor’s suicide and him leaving his share of Underworld to Alya Nazir, Peter – using money from the pub after dumping Toyah – bailed Carla out and became her business partner.

Still not sure if she could trust him, she set him up by interviewing a machinist who was Tina’s lookalike. Peter passed the test and before long Carla confessed to her dad Johnny that she still had feelings for her ex.

Right now the pair have admitted that they still love each other, but Carla thinks they are too similar to work.

She wants her ex to be happy, though, and has bought him a boat so he can sail the high seas.

Do you think they should get back together?