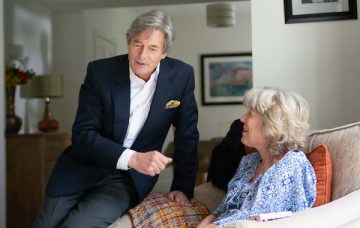 The shock death will devastate one Corrie resident

Nigel Havers’ Coronation Street conman character is reportedly going to meet his maker in a “bloodbath” as Weatherfield welcomes in 2019 – just eight months after the 66-year-old star returned to the ITV soap for a third stint.

A TV source told The Sun’s Bizarre TV column: “The intense plot will play out over the new year.

“Nigel always knew he wouldn’t last long on the cobbles when he signed up to return and what a way to make an exit.”

The Chariots of Fire star first appeared in the soap as gentleman escort Lewis in 2009 who was hired by Audrey Roberts (Sue Nicholls), and they were later involved in a love triangle with Rita Sullivan (Barbara Knox). He also wooed Audrey’s mate Claudia.

He lasted less than a year after fleeing with a fortune when he scammed Peter Barlow’s (Chris Gascoyne) betting shop when he cashed fraudulent betting slips.

Nigel was back on the cobbles in February 2012 but departed a year later, and he returned to Weatherfield in June 2018.

It’s not known how Lewis might meet his maker, but he will not be the only local resident to dice with death.
Peter and his son Simon Barlow (Alex Bain) are set to be involved in a terrifying boat blaze, which will see their lives “hang in the balance”.

A source recently told The Sun: “There’s a massive fire on a boat on the canal and Simon is inside.
“Peter and Simon’s lives hang in the balance. It’s going to be a huge stunt. They’re planning massive pyrotechnics and special FX.”

The intense inferno will take place on the Weatherfield Canal, but Peter will manage to rescue his son by chucking him onto the towpath.

The source added: “Someone raises the alarm and Peter races to rescue his son who has passed out from smoke inhalation. He will jump on to the burning boat and go below deck to try to get to Simon.

“He will manage to rescue him by throwing his lifeless body over the side and into the arms of neighbours, gathered on the side of the canal.”

Do you think Lewis should be killed off? Leave us a comment on our Facebook page @EntertainmentDailyFix and let us know what you think!