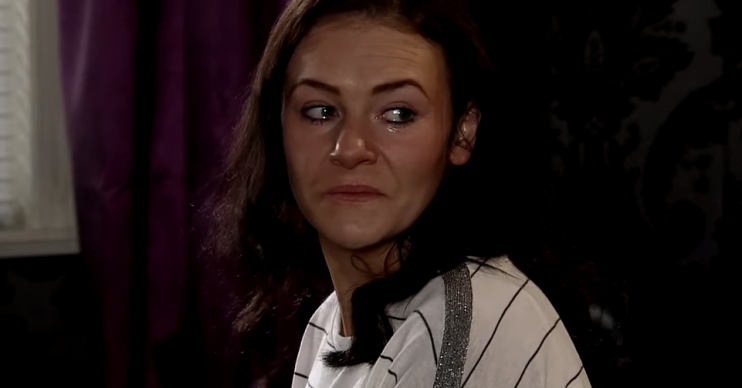 But she's hopeful of a return

Kerri Quinn, who plays Vicky Jefferies in Coronation Street, has confirmed she’s departing the cobbles at the end of Vicky’s storyline – but she’s already planning her return.

Pregnant Vicky currently has no idea she’s the other woman in boyfriend Robert Preston’s life as he keeps her hanging on while also planning his wedding to Michelle Connor.

But as she takes matters into her own hands this week and decides to tell Michelle she’s having Robert’s baby, things could get messy – if Robert can’t stop her in time.

Both Tristan Gemmill and Kym Marsh are leaving the soap this year, and now in an interview with Metro.co.uk, Kerry has confirmed she will also be exiting at the end of the storyline.

But the actress has loved her time on Corrie so much she’s already thinking of ways her character can return to the cobbles.

“I think the difficulty there is how, because she has no link to the street,” Kerri explained.

“Nobody really likes her, she has no friends, so it’s hard, how you do it.”

She went on to admit people may warm to Vicky more after seeing what Robert’s doing to her.

“I’m wondering, this is me thinking out loud,” she continued, “if she does have Robert’s baby, what link does she have to the Bistro. Because surely her child would have some rights or entitlement?

“My initial thought was if I was to stay, which I’d love to, then how can we link her to the Street?

“I think the factory is more interesting [than the Bistro] because you do need someone there to just to be that annoying person, to just kinda stir it up and she definitely does have that potential!”

With Vicky’s baby set to be a Christmas baby, and Tristan Gemmill confirmed for panto this festive season, it looks like a Yuletide exit might be on the cards.

Could the chef get his longed-for child? Or will all his cheating and lying see him lose everything?

On-screen Vicky is currently torn between Robert and her ex, Jed.

Tonight sees Robert get in a fight with Jed, who is trying to persuade Vicky to move back to Ireland with him.

Vicky tells Robert if he gives her a better option, she’ll stay – and tells Robert he must prove his loyalty by finally telling Michelle about the baby.

Of course, Vicky has no idea Michelle is still in a relationship with Robert and they’re planning their wedding, so when Robert hestitates, Vic decides to take matters into her own hands and tell Michelle for him…