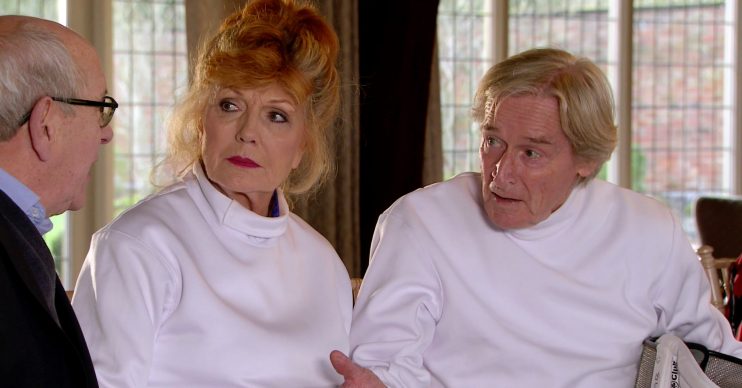 It's weapons at dawn for the warring pair

Ken Barlow is set for a dramatic sword fight with his nemesis Charles in Coronation Street.

The retired teacher has become determined to destroy Still Waters’ board chairman Charles ever since he realised he was scamming the residents of the retirement community.

But fans couldn’t foresee that Ken’s plan would involve a real-life sword fight!

However that’s exactly what’s set to happen after Ken challenges schemer Charles in the upcoming election.

Charles has been conning members of the retirement community with unfair and outrageous fines for bizarre ‘crimes’.

And after hearing how Charles insulted Ken’s beloved and now late dog Eccles, Ken vowed to destroy him.

He has called an election for a new chairman, forcing Charles to actively defend his appointment.

Ken and Claudia decide to throw a drinks party to woo some of the residents and get dirt on Charles, but are left disappointed when no-one turns up.

Why does Ken have a sword fight with Charles?

It soon becomes clear that Charles has decided to throw his own party at the same time.

Furious at his underhanded behaviour, Ken and Claudia, helped by Norris, realise that they need more than just a charm offensive to win.

They hatch a plan to get their hands on Charles’ Still Waters rule book after it proves elusive.

When they realise there’s no way Charles will willingly hand over evidence of his own corruption, Norris gently suggests Ken lures Charles out with a demand for a fencing match.

Ken climbs into his costume and prepares to do battle with Charles, sword in hand.

But unsurprisingly he fails to better his rival – in the match at least.

Elsewhere Norris and Claudia have used the fight as a distraction so they can snoop around to find the rulebook.

Victorious they find it and later when they read through it they realise the horrifying extent to which Charles has been scamming the residents.

And with Ken armed with this knowledge, he prepares to take Charles down once and for all.

But will he be able to do it? Leave us a comment on our Facebook page @EntertainmentDailyFix and let us know what you think!