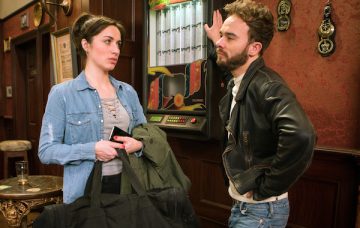 The David Platt actor swore as he ripped into the story, adding an emoji of a sleeping, snoring face to emphasise his annoyance.

Jack and Julia had been pictured having an intense-looking conversation in a central London street in the hours following his Inside Soap Awards triumph.

The Best Actor winner was shown frowning and rubbing his face as Julia – who plays his girlfriend Shona Ramsey in the ITV soap – opened her arms to make a point during the late Monday evening chat in a Soho doorway.

However, 30-year-old Jack has refused to let speculation the pair had falling out go.

He told his near 450,000 followers on Twitter: “Another day another [bleep] story written about me.”

Danny responded to Jack’s tweet by light-heartedly asking whether he was in the story, too.

And in his reply, Jack revealed the source of his frustration and scotched the tabloid story as he laughed at Danny’s gag.

“No lad just me and Julia have fallen out apparently haha,” typed Jack.

It has been a high profile few weeks for Jack after it was reported earlier this month he has signed a new Corrie deal.

The deal is said to put him near to the pay scale enjoyed by the likes of show veterans Bill Roache and Barbara Knox.

Commenting on the reports about his pay, Corrie co-star Kym Marsh insisted nobody within the cast actually knows who the highest paid actor is – nor do they care.

The Michelle Connor star wrote in her OK! Magazine column: “We don’t talk about how much we earn at work.”