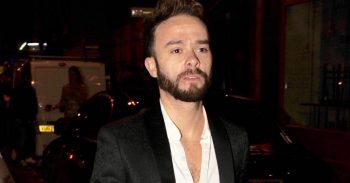 He's put his side of the story out there

Jack P. Shepherd “ran off” from a group of fans who started “screaming” at him from a beer garden.

The Coronation Street star has denied claims that he refused a picture with a group of people because they were Scousers – an informal term used to describe people from Merseyside – and insists he only fled the situation because he was being shouted at.

He wrote: “Don’t remember saying no because you were scousers, didn’t even know you were, I simply ran off, because you all started screaming from a beer garden #[Bleep]ThatLove (sic).” 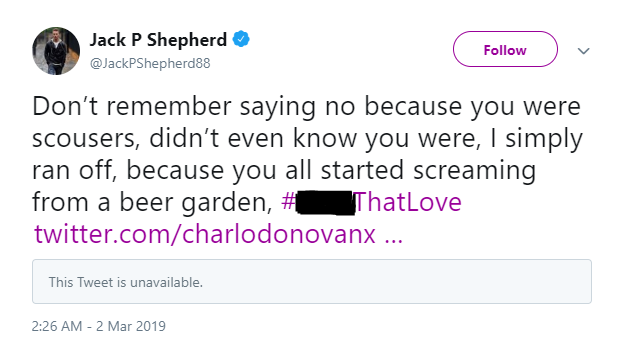 Jack’s response came after one of the group alleged he said “no” to a photo after finding out they hailed from Merseyside.

In a tweet which has since been deleted, they wrote: “Oh well only seen @JACKPSHEPERD88 in Manchester media city tonight with my friends asked could we get a picture with him. The min he found out we were scousers his reaction was simply no (sic)”

Several of Jack’s fans took to Twitter to defend the 31-year-old star, who plays David Platt on Corrie.

One wrote: “I think people make the mistake of thinking they are owed something from you, just because they ‘know you from TV.’ Onwards & upwards, Jack. (sic)”

Another posted: “It must be frustrating that people act like this, its up to you whether you stop for people and its bang out of order that their accusing you of saying no because of being scousers! (sic)”

One shared: “People definitely think they are owed the right to get pictures with celebs. Glad you’ve stuck up for yourself this is how rumours get started of celebs being arrogant or divas when in reality we usually only get one side of the story (sic).”

Jack is currently at the centre of a huge storyline which has seen his character David Platt struggles as his wife, Kylie’s killer, Clayton Hibbs, take David’s current girlfriend, Shona Ramsey hostage.

Do you think Jack was right to run away? Leave us a comment on our Facebook page @EntertainmentDailyFix and let us know what you think.