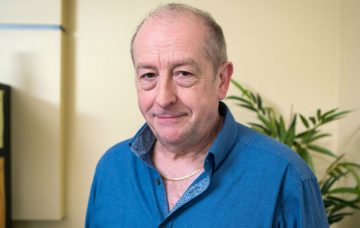 He won't go out alone near where the soap is filmed

Coronation Street’s Ian Bartholomew doesn’t go out in Manchester’s MediaCity without Shelley King for fear of a fan backlash over his Corrie character.

The 65-year-old star believes he is the “most hated man in the country” because of playing Geoff Metcalfe.

The soap character has been psychologically abusing his wife Yasmeen Metcalfe (Shelley) for months as part of a coercive control plot.

Shelley said: “He told me he was the most hated man in the entire country!

“Sometimes he stays with me and Trilby as he lives away and he said he wouldn’t go out in MediaCity in Manchester unless I was with him.

“When we’re walking, people wind down their car window and shout, ‘Leave him!’ ”

As a result of the hard-hitting nature of the storyline, Ian’s children don’t want his dad in action.

“It would be too upsetting to watch their dad becoming this person.”

Shelley recently admitted she and Ian “barely talked” on set for a day-and-a-half while filming their characters’ bloody brawl – in which Yasmeen bottles Geoff – to ensure they had full concentration on the intense scenes.

When asked if the pair lightened the mood during filming or if it was important to stay in the moment, Shelley said: “Ian and I are very close, we are great friends and we understand each other.

“During the day and a half that we concentrated on the portrayal of that horror we had to keep in the moment, barely talking outside the scene.

“It was also a closed set. You have to contact so many things in yourself. When you have three minutes filmed over a day and half you have no recovery time and you can’t afford to joke and laugh.

“Every single person on set understood and were amazing and were concentrating on making those moments happen.”