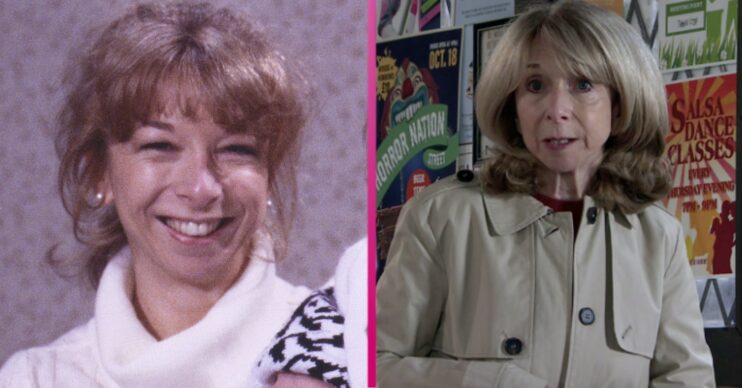 Coronation Street’s Gail: How many times has she been married?

What was the story with Gail and serial killer hubby Richard Hillman?

Coronation Street‘s Gail is the much-married matriarch of Weatherfield, with a brood of ungrateful children and a very troublesome mother!

Gail Potter came to Coronation Street as a teenager back in 1974, and by the late 70s she was a firm fan favourite after moving in with Street legend Elsie Tanner.

In fact, it was at a party at Elsie’s that Gail met Brian Tilsley, who had gatecrashed the do.

How many times has Gail Platt been married?

Gatecrasher Brian Tilsley became Gail’s first husband. The pair were happy for a while, and they were chuffed when their son Nicky was born.

But their marriage was full of ups and downs not helped by Brian’s overbearing mum, Ivy Tilsley, and Gail’s affair with Brian’s cousin Ian Latimer.

When Gail had her daughter, Sarah-Louise, she thought she could be Ian’s daughter. A blood test proved Brian was the daddy, but he struggled to bond with his little girl.

After that, the marriage hit all sorts of trouble and Gail was devastated when, after another huge row, Brian stormed off to a nightclub and got stabbed to death.

Coronation Street’s Gail fell in love with much younger man Martin Platt and despite the disapproval of the scandalised locals, the pair settled down and tied the knot.

The couple’s son David was born and things looked good.

But Martin struggled with teenage Nick, who didn’t want a new dad, and eventually, he had an affair with fellow nurse Rebecca Hopkins.

Martin was planning to leave when Gail – to her absolute horror – discovered her teenage daughter Sarah was pregnant.

After baby Bethany was born, Martin moved out and the pair divorced.

When Gail met charming Richard Hillman he seemed too good to be true. And he was!

Their marriage seemed happy but poor Gail was unaware that Richard had money trouble and was prepared to go to sinister lengths to cover them up.

Richard killed his business partner Duggie Ferguson then his ex-wife Patricia, and even tried to kill Gail’s mum Audrey Roberts and pretended she had Alzheimer’s disease.

He also swindled Gail’s friends and neighbours out of their savings and went on to brutally murder Maxine Peacock.

When Richard confessed his crimes to a shocked Gail, she called him “Norman Bates with a briefcase”. Richard fled but returned a few weeks later determined to kill himself and his family.

He kidnapped Gail, her terrified kids and little Bethany, and drove into the canal. The family survived but Richard drowned.

After the disaster of her marriage to Richard, Gail stayed away from men for a while instead concentrating on her children who were putting her through all sorts of trouble. Sarah was struggling after the death of her baby Billy and her romances with both Grimshaw brothers, Todd and Jason, while David was being even more troublesome than his son Max is nowadays!

But eventually, Gail met Joe McIntyre – dad of David’s girlfriend Tina – and the pair got together.

Like Richard before him though, Joe was hiding his money problems from his wife, and he planned to fake his own death and pocket the insurance.

His scheme went wrong though and Joe died, and Gail was even arrested for his murder.

After that Gail fell for Michael Rodwell – a reformed burglar – and the pair got married. Though Michael briefly left Gail for Eileen Grimshaw, he returned, only for him to suffer a heart attack thanks to Corrie killer Pat Phelan, who watched him die in front of him without helping.

Read more: Who is in the 2022 cast of Coronation Street?

Throw in an ill-fated romance with Lewis Archer, another con man, and it’s easy to see while Gail – who is officially still Gail Rodwell, though she’ll always be Gail Platt to us – has stayed away from men for a while!

Gail is played by actress Helen Worth. She’s said she loves playing the part, and has no plans to leave.

How old is Gail Platt?

Gail is almost the same age as her alter ego. Helen was born in January 1951, making her 71 years old.

Who is Gail Platt married to in real life?

Helen was married to Thomas the Tank Engine narrator Michael Angelis for ten years from 1991 until 2001.

And in 2013, she married Trevor Dawson – a deputy headmaster, who says Gail was always his favourite character on the soap!