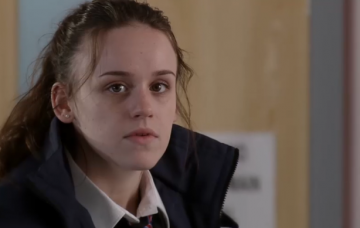 Ellie Leach's character has been lying low for a while...

Coronation Street’s Faye Windass has been a bit quiet of late, but that could all be about to change…

If actress Ellie Leach gets her way, that is!

The teenager has revealed that her character is too “normal” at the moment, and that she’d love to see her go off the rails again.

Viewers will know that Faye arrived in Weatherfield as the adopted daughter of Anna and Eddie Windass, before tracking down her birth father Tim Metcalfe.

Since her arrival, she’s been involved in some explosive storylines including being bullied – and becoming the bully –  accusing Anna of abusing her, falling pregnant at the age of 12 and keeping it secret from her family.

She had the baby but struggled to bond with her, so eventually gave her away.

Faye was also at the centre of the Eileen stalker storyline, tormenting the Weatherfield resident for staying loyal to Pat Phelan for so long. Oh and she killed poor Owen’s fish!

Ellie, who is the real-life cousin of fellow Corrie star Brooke Vincent, recently told The Mirror: “I feel like I want to go back to that, I feel like she’s just dead normal now. I want to have a bit of a rebellious stage again.”

We’re not sure poor dad Tim could cope with any more drama, though.

Ellie also opened up about the pressures of working on the ITV soap, while also studying.

She said: “I’ve been on Corrie since I was like nine, so I’ve been used to it through school.

“I’m doing drama at college, so it’s more learning about theatre and everyone in my class is dead nice and all the tutors are fine if I need to go to work.”

She also revealed she’d love to venture into theatre.

Would you love to see another villain on the Street? Leave us a comment on our Facebook page @EntertainmentDailyFix and let us know what you think!