Hairdresser Emma was recently devastated when her dad died of cancer.

"Is your grandma still alive, because she put the fear of God into me!"

But she was shocked when her mum Fiona Middleton's identity meant that she discovered her dad wasn't her biological dad.

Instead it turned out that Steve McDonald had gotten Fiona pregnant shortly before she left Weatherfield and he is Emma's biological father.

And while the pair have been trying to work out what their relationship is with Emma still grieving, last night they had a touching heart to heart.

Emma asked him what he would have done had he known about her, and he said: "She didn't tell me.

"It might have saved me, there have been a few wives. I was mad on her but I messed it up as usual.

"I wasn't at my best but I've grown up a lot since then." 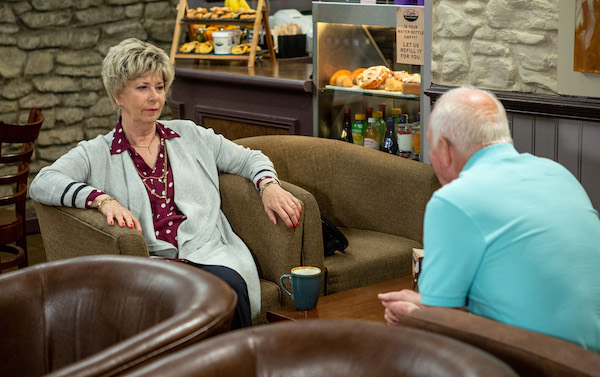 She has played Diane in Emmerdale for 20 years (Credit: ITV)

And then Steve reminded viewers of Emma's surprising connection to Emmerdale's Diane.

He asked her: "Is your grandma still alive? Because she put the fear of God into me."

And when Emma confirmed she was, telling him she lives on the Isle of Wight, the Corrie Twitter account dug out an old picture of Emma's grandmother and tweeted it.

And fans were delighted with Pam being played by Emmerdale's own Elizabeth Estensen who began playing Diane Sugden a year after leaving Corrie in 1998.

One said: "I see a familiar face there right in front of my eyes 👀👁️ Isn't that Diane Sugden? from @Emmerdale? 🤔"

Another said: "Well she won't be moonlighting from the Dales to the Cobbles... that we do know!"

Do you remember Pam in Corrie? Leave us a comment on our Facebook page @EntertainmentDailyFix and let us know what you think!