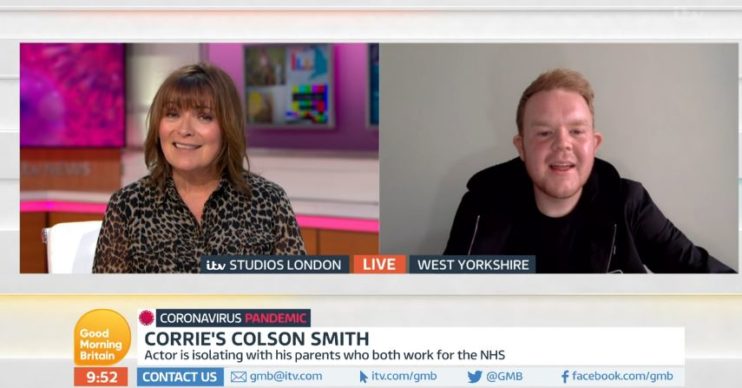 The star is going through a weight loss transformation

The soap star appeared on the show to chat about what he has been up to since Corrie stopped filming.

Colson spoke about keeping his spirits high and staying fit during lockdown.

GMB viewers enjoyed this interview and praised Colston for being “so positive”.

Showcasing a trimmer figure, he explained to Lorraine via video broadcast, how he was maintaining this despite the lockdown.

Revealing he has nutritious food delivered amid the health crisis and is trying to exercise as much as possible.

The star started his fitness journey as part of his character’s story line on the show.

Speaking on GMB this morning Lorraine said: “You’re going to have to keep fit as that is what we are seeing in Coronation Street, Craig is keeping fit. You’ve got to do it as well. You cannot sit there eating chocolate.”

Colson replied: “It’s all about keeping motivated, trying to achieve something everyday. ”

Lorraine questioned if he had access to anything special like a home gym. The actor admitted he did not.

“When I started preparing for this story line, I sat down and tried to work out how I could make this as easy for myself as possible.”

He went on to explain how he sat down with a life coach to come up with a plan.

He said: “I have my breakfasts and lunches delivered…I n terms of the gym, I kept in touch with the gym I go to in Manchester as they are putting programs online. I’ve also done the odd Joe Wicks PE.”

The soap actor continued: “It’s making the most of the situation. Plenty of runs. Trying to do as much at home as possible.”

Episodes  of the popular soap were reduced in order to make sure there are plenty to last until filming resumes.

Colson Smith revealed how he had asked Corrie’s production team if there was anything who could to help, now he could no longer attend work.

Speaking to the Scottish Presenter, he said: “They came up with this idea which is Corrie Good News…The idea is we give Corrie fans a little bit of good news and little bit of fan q.”

Colson continued: “Just to keep everyone in touch. Keep everyone talking and using Corrie to do that really.”

Good Morning Britain fans watching along at home, shared their thoughts on the uplifting segment.

One viewer commented: “Such a lovely guy and so positive #ColsonSmith #Corrie #lorraine”

Another agreed: “I second this. That was a great interview.”

A final tweet read: “@GMB so happy to see big man @colsonsmith on the show, got to be the best character on the street.”