She posted a picture of her all dressed up and effortlessly doing the splits!

"Allergies won't stop my Cats audition," she joked alongside the snap.

Fans were surprised by the picture, with one writing: "Your hidden talent!"

"Ooh stunning and bendy," said another. 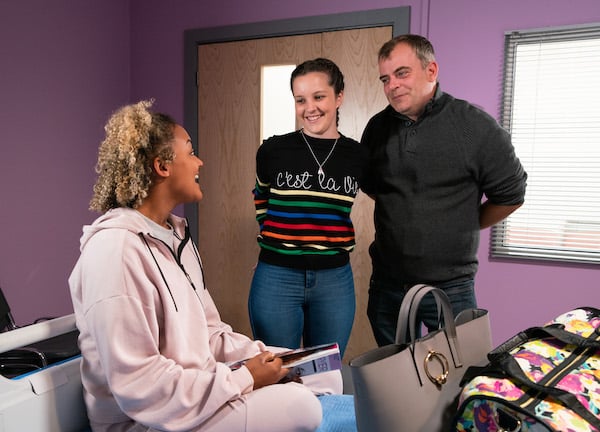 Emma's family are pleased she is okay (Credit: ITV)

Emma is currently playing out a storyline which saw her rushed to hospital with a ruptured appendix.

Her dad, Steve McDonald, has accused Dr Ali Neeson of being negligent as he sent Emma home with food poisoning.

Fortunately, Emma survived the ordeal and will be discharged from hospital this week.

In real life, things are slightly less dramatic for Alexandra, who revealed last week she's planning to move in with her boyfriend of two years, fellow actor, Joe Parker.

In their first interview as a couple Joe told how they are planning to take the next step in their relationship.

In the interview and photoshoot with OK!, loved-up Joe, 25, revealed he is thinking of moving back to Manchester to be with his other half.

Before the Irish wedding party took place, we looked quite smart 💙

Joe, also an actor who has appeared in several episodes of Doctors, said: "We talk about moving in together.

"I'm thinking about moving back to Manchester, so that will be the next step."

But he insisted it was "a bit early" for the couple to be talking about marriage.