Alan Halsall has delighted Coronation Street fans with a beautiful holiday picture with his girlfriend Tisha Merry and his daughter Sienna-Rae.

They are currently enjoying a getaway in Greece, and Alan is clearly thrilled with his lot in life.

In fact, he wrote alongside the snap: "Hard to caption this really.... #Happiness," followed by a yellow heart emoji.

Tisha replied to his post with a heart-eyed emoji, and Corrie co-star Andy Whyment, who is also on holiday on Greek island Kos, commented: "Love this picture pal."

Plenty of fans added their comments of "beautiful" and "Lovely", with one saying: "Love Love Love this... You so deserve to be happy."

Others were stunned by how alike Alan and Sienna-Rae are: "Little daddy lookalike," wrote one.

"That little girl gets more like you everyday," added another. 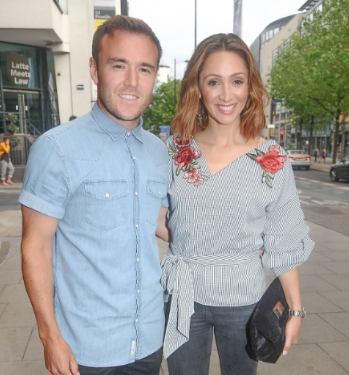 Alan and Lucy-Jo divorced in May 2018 (Credit: Fameflynet)

Lucy-Jo said in a statement: "I can confirm that Al and I are divorcing.

"We remain friends and devoted mummy and daddy to our daughter Sienna.

Hard to caption this really.... #Happiness.

Lucy-Jo moved in with new boyfriend Lewis Devine in November 2018, while Alan and Tisha confirmed their romance in May of this year after rumours of them dating surfaced months earlier.

And things seem to be going from strength to strength as they holiday together.

As well as the family snap, the couple have posted a series of Instagram Stories of them enjoying an evening glass of wine together, and Alan all dressed up for the night.

Tisha has also shared a picture of her looking amazing in a bikini on her main grid.

She captioned the shot: "Halkidiki heaven."

Alan was one of the first people to comment on the snap with a fire and heart-eyed emojis.

In fact, the fire emoji seemed to be a running theme on the picture with lots of fans posting a series of them.

Another commenter added: "You're too beautiful my lovely. Something is making you glow. Or somebody!"

"Fire! Giving Aphrodite a run for her money," said someone else.

A third cheekily added: "Wow, Alan Halsall, too good looking for you lad!"

On their first day on the holiday, Tisha posted another picture of her day's reading with a pair of sunglasses and some fresh fruit by the pool - looks like bliss!