As the dust settles on the factory roof collapse in Coronation Street, the lives of the residents will never be the same again.

Disasters and huge stunts have happened before. Here's a look, in no particular order, at Corrie's nine most explosive ones.

Sally fell through the roof after a row with Gina (Credit: ITV)

Carla's (Alison King) desperation to save money has seen the loss of a life and many others injured, not to mention leaving half the Street residents out of a job.

But was it really all Carla's fault? At this point, we don't know - someone tampered with the roof, making it unsafe, and causing it to cave in when Sally Metcalfe (Sally Dynevor) stumbled while rowing with sister Gina Seddon (Connie Hyde) as they hung banners up protesting another of Carla's cost-cutting measures. But we have no idea if it was Carla or one of the six other suspects.

The factory was meant to be empty, but it wasn't, and as the roof caved in, it trapped the protesters below - and one non-protester, who'd just popped in to retrieve her handbag, Rana Habeeb (Bhavna Limbachia).

Rana's quick stop-off on the way to marry Kate Connor (Faye Brookes) proved fatal when the she was caught under the rubble. With the building unsafe, a further collapse saw her unable to be saved. She died with Kate by her side just after they said their moving wedding vows. 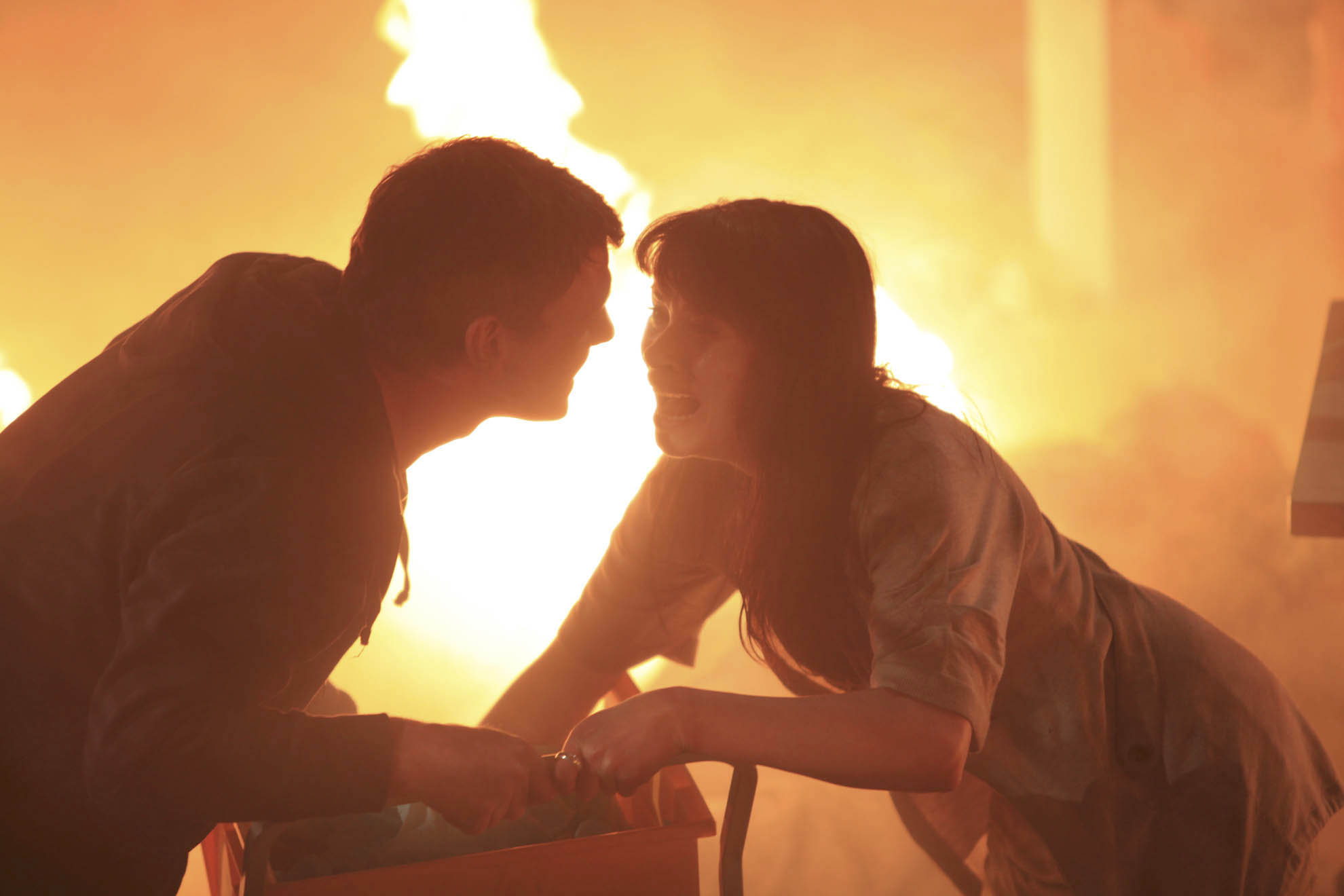 Carla escaped Tony and the fire, he didn't escape at all (Credit: ITV/REX/Shutterstock)

In June 2010, escaped murderer Tony Gordon (Gray O'Brien) took revenge on Carla and everyone who'd wronged him by rocking up at the factory with a gun and holding Carla, Hayley Cropper (Julie Hesmondhalgh) and Maria Connor (Samia Longchambon) hostage.

Tony was aided by his fellow escaped cellmate Robbie Sloane (James Fleet), who was then shot dead by Tony as a thanks for all his help. Nice.

Proving he wasn't all bad, Tony let both Maria and Hayley go, but insisted he and Carla were going to die together. He left her tied to a chair while he set fire to the premises.

Carla managed to escape, shot Tony and ran out of the factory. Her evil ex followed her briefly, before changing his mind, returning inside and dying in the factory explosion.

The episodes were to be screened across an exciting week in May of that year, but after real-life gunman Derrick Bird went on a killing spree murdering 12 people and then himself, ITV rescheduled the storyline as a mark of respect to the victims and their families. 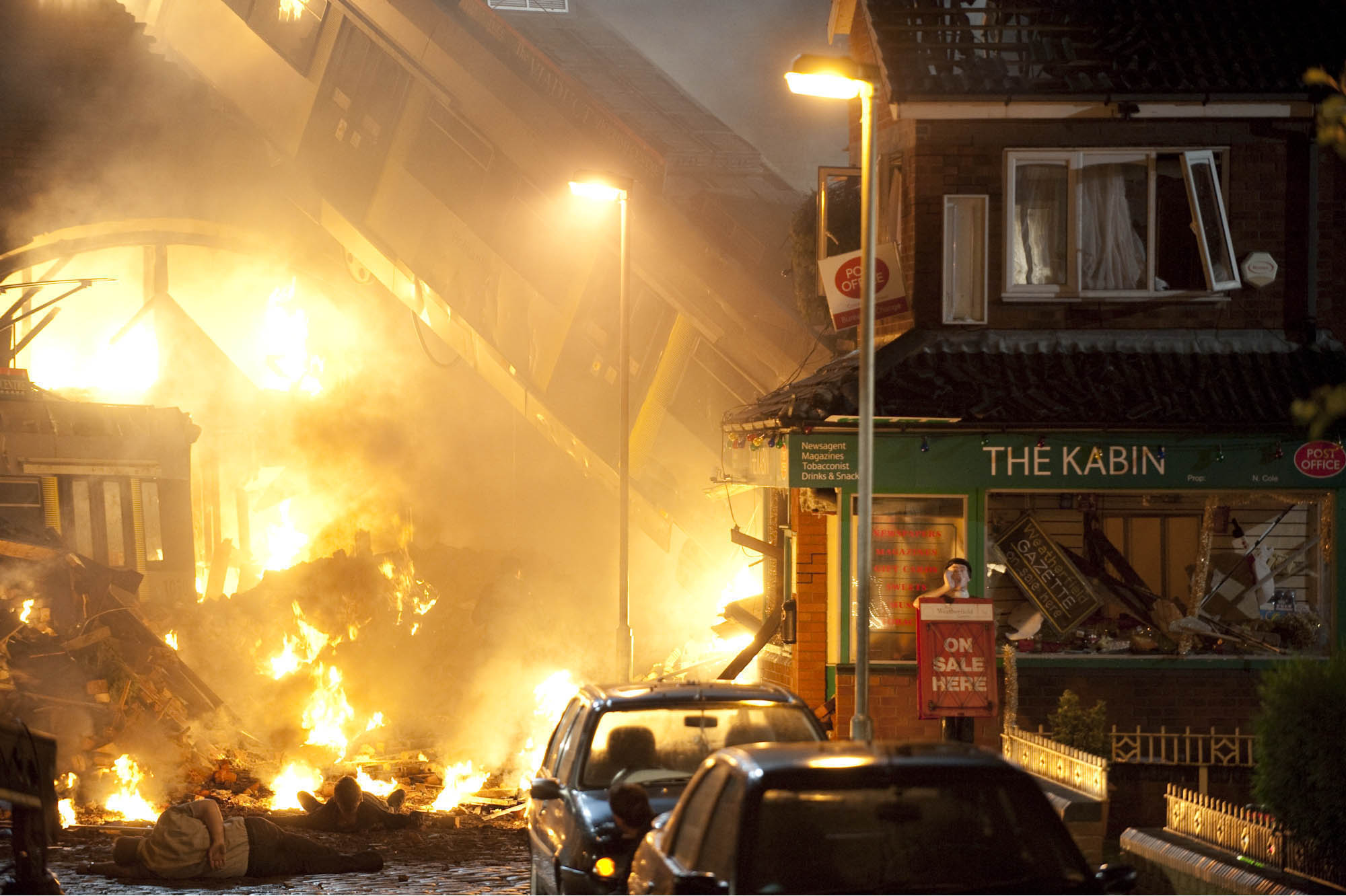 With Corrie turning 50 in December 2010 something big was needed to mark the occasion. And in probably the biggest stunt Soapland has ever seen, Corrie delivered as a tram derailed and crashed onto the Street.

The resulting devastation was taglined 'Four funerals and a wedding'. Those who lost their lives were Molly Dobbs (Vicky Binns), who didn't depart this world before telling Sally Metcalfe (Sally Dynevor) that she'd had an affair with Sal's then-husband, Kevin Webster (Michael Le Vell) and he'd fathered Molly's son, Jack; Ashley Peacocke (Steven Arnold), and an unnamed taxi driver.

The fourth death was Charlotte Hoyle (Becky Hindley) who was actually offed by serial killer John Stape (Graeme Hawley) who needed to silence her and covered up his act of murder by disposing of her body in the crash rubble.

As well as those who perished, Rita Tanner (Barbara Knox) survived her second encounter with a tram when she was rescued from the rubble of the Kabin.

And Peter Barlow (Chris Gascoyne) looked like he wasn't going to make it as he was rushed to hospital. He and then-fianceé Leanne Battersby (Jane Danson) had what they thought would be a deathbed wedding, and when Peter crashed straight after the vows, it didn't look good. When the programme decided to modernise its sets in 1986, producers agreed to have a fire at the Rovers so the place could then be rebuilt.

The fire broke out after hours when then-landlady Bet Lynch (Julie Goodyear) was upstairs in bed. Jack Duckworth (Bill Tarmey) joked she'd probably been smoking in bed, but in fact, he'd accidentally caused the fire when he'd tried to repair a faulty fuse.

Kevin and Sally were passing by that night, saw the flames, and alerted the fire brigade. Bet was rescued and recovered from smoke inhalation while the whole of the Rovers was knocked down and put back together. The internal layout hasn't changed ever since. 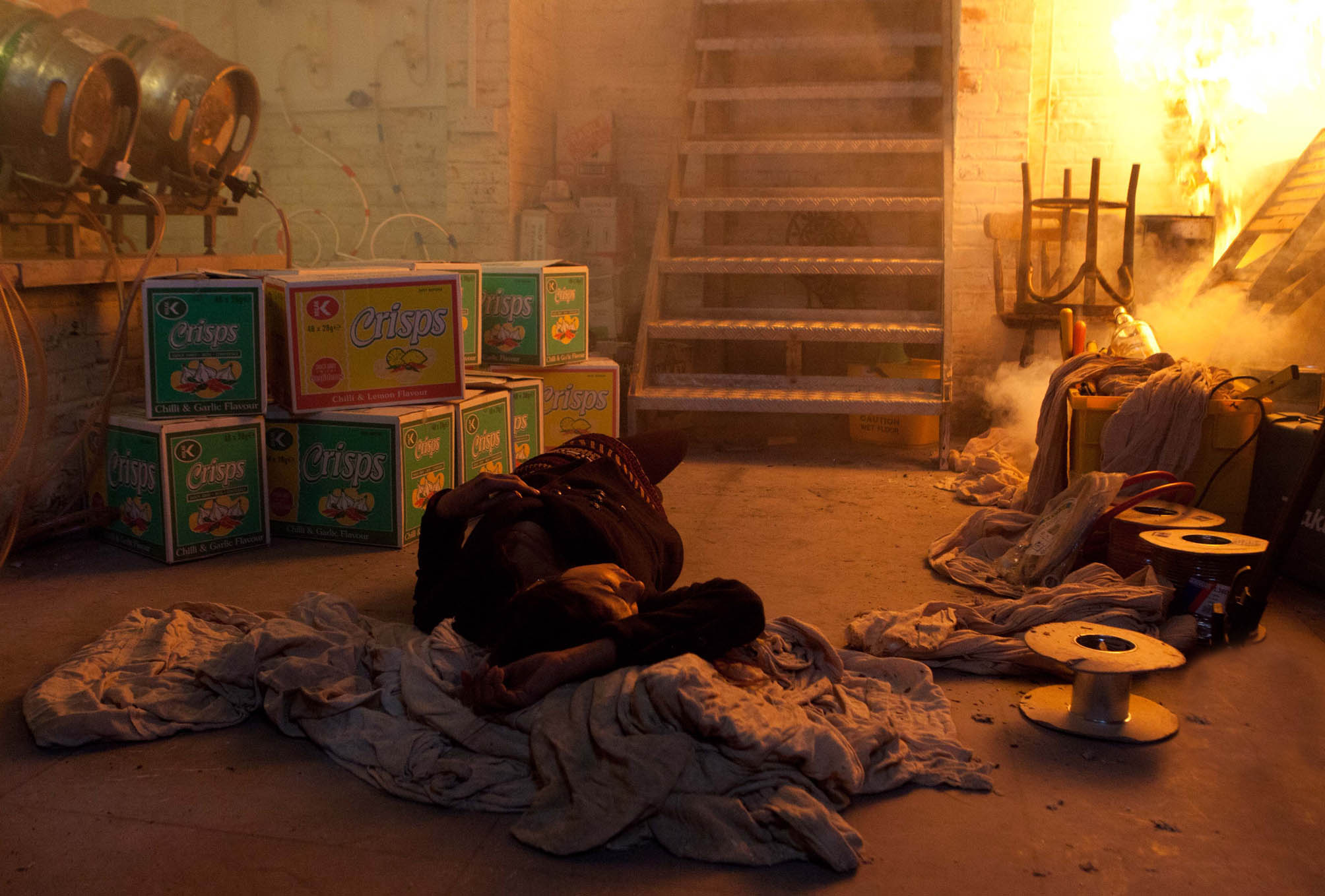 Sunita was left to die when Karl started the blaze (Credit: ITV/REX/Shutterstock)

Karl had had an affair with Sunita Alahan (Shobna Gulati), who caught him in the act of setting the fire. Karl knocked her unconscious and left her in the cellar as the flames took hold.

What Karl didn't know was Stella was in the pub too and when he found out, he rushed upstairs to save her. The stairs collapsed though, trapping them both, so it was down to firefighters Toni Griffiths (Tara Moran) and Paul Kershaw (Tony Hirst) to rescue them.

Toni got them out, but the roof collapsed on her and she was killed. Sunita was found and taken to hospital in a coma, but was killed by Karl when she started to recover so she could never tell them the truth.

The Rovers reopened in May 2013 and Karl's crimes were discovered in September of the same year, seeing him imprisoned for 25 years. 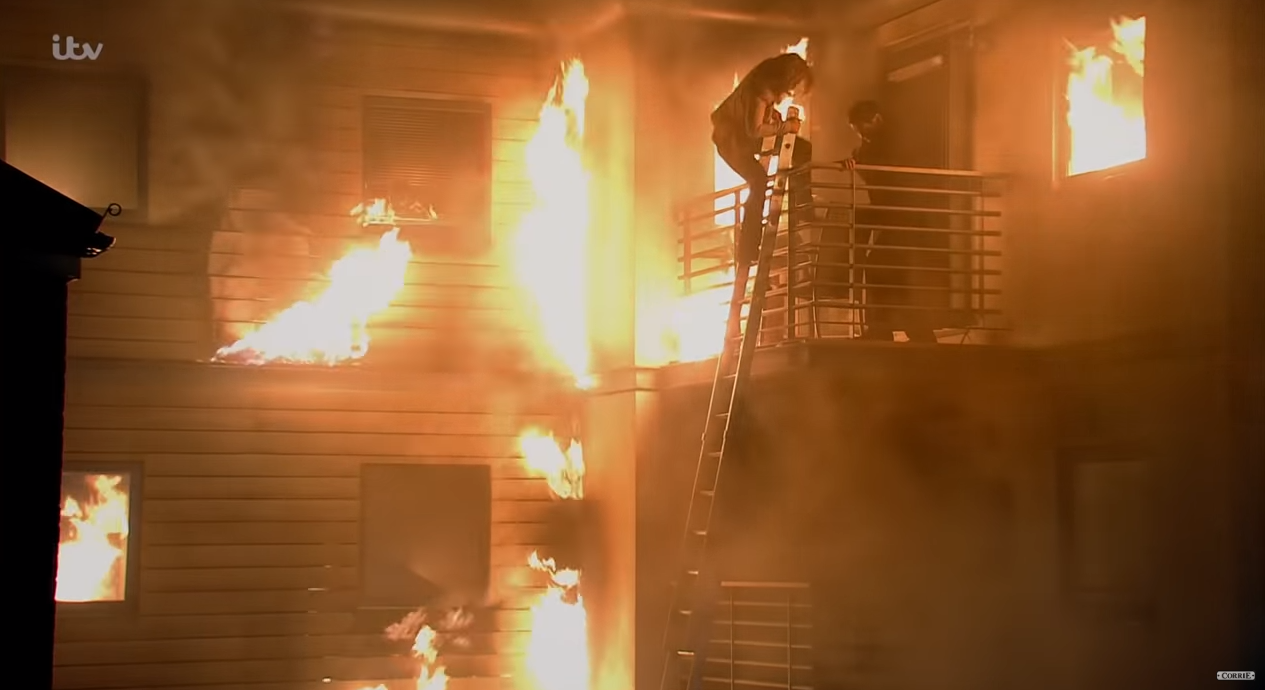 Tracy Barlow (Kate Ford) was out for revenge on Carla after Carla thwarted her plans to get her hands on the Rovers Return in 2015.

Creeping into Carla's flat while she slept, Tracy contemplated killing her, but instead lit a candle and left it next to a lampshade.

With the flat soon engulfed in flames, Leanne spotted them and rushed in to save Carla. But Tracy's world came crashing down when Carla revealed Tracy's daughter, Amy, was in the flat.

Leanne and her boyfriend Kal Nazir (Jimi Mistry) went back inside to rescue the youngster and Leanne got Amy to safety. But sadly, just as Kal was climbing down, a gas cylinder on the balcony ignited and the flat erupted into a fireball, killing Kal instantly.

At the same time, Jenny Bradley (Sally Ann Matthews) was trying to abduct Kevin's son, Jack, and Maddie Heath (Amy James-Kelly) was on her way to tell Sophie Webster (Brooke Vincent) what Jenny was up to.

A second explosion ripped through the builders' yard as she walked past and Maddie was also killed.

Carla went into meltdown, drinking heavily, gambling and even contemplated taking her own life. Guilty Tracy confessed, but she was released without charge due to lack of evidence. 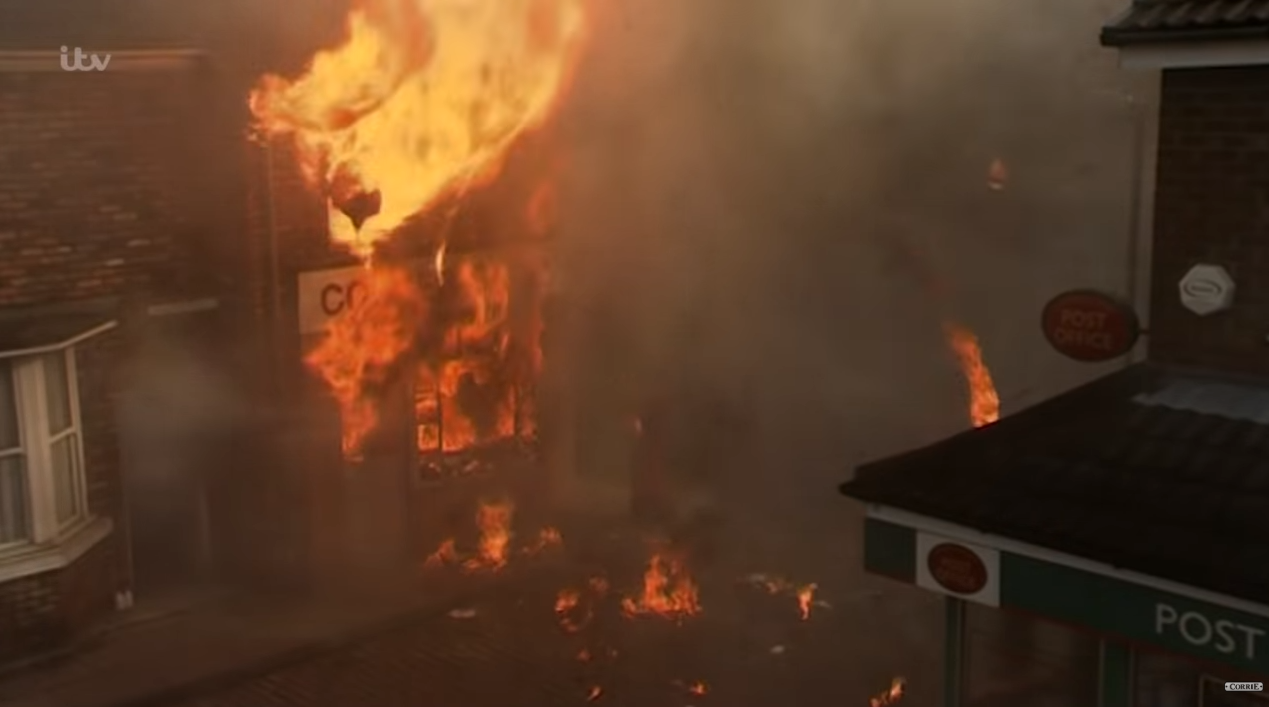 Hell hath no fury like a woman scorned and where Maya Sharma (Sasha Behar) was concerned never a truer word was spoken. Maya was furious at losing boyfriend Dev Alahan (Jimmi Harkishin) to Sunita and decided to get revenge.

She smashed up the flat she and Dev shared together and then disappeared for a few weeks during which she began secretly marrying illegal immigrants in Sunita's name. After having Sunita and Dev arrested on their wedding day, Maya stepped things up a gear.

She began a fiery campaign - lighting blazes at Dev's empire of shops. The cobbles corner shop was her last target and she took Sunita hostage, hit Dev over the head with a fire extinguisher, tied them both up and left the gas cooker on upstairs while she lit a fire downstairs.

Ciaran McCarthy (Keith Duffy) and Charlie Stubbs (Bill Ward) managed to get into the flat and rescue the Alahans just as the building exploded into a fireball.

But Maya wasn't done and wanted to run down the couple who'd wronged her, but she missed and crashed her red sports car into the viaduct. She was finally stopped when she reversed into an oncoming lorry. 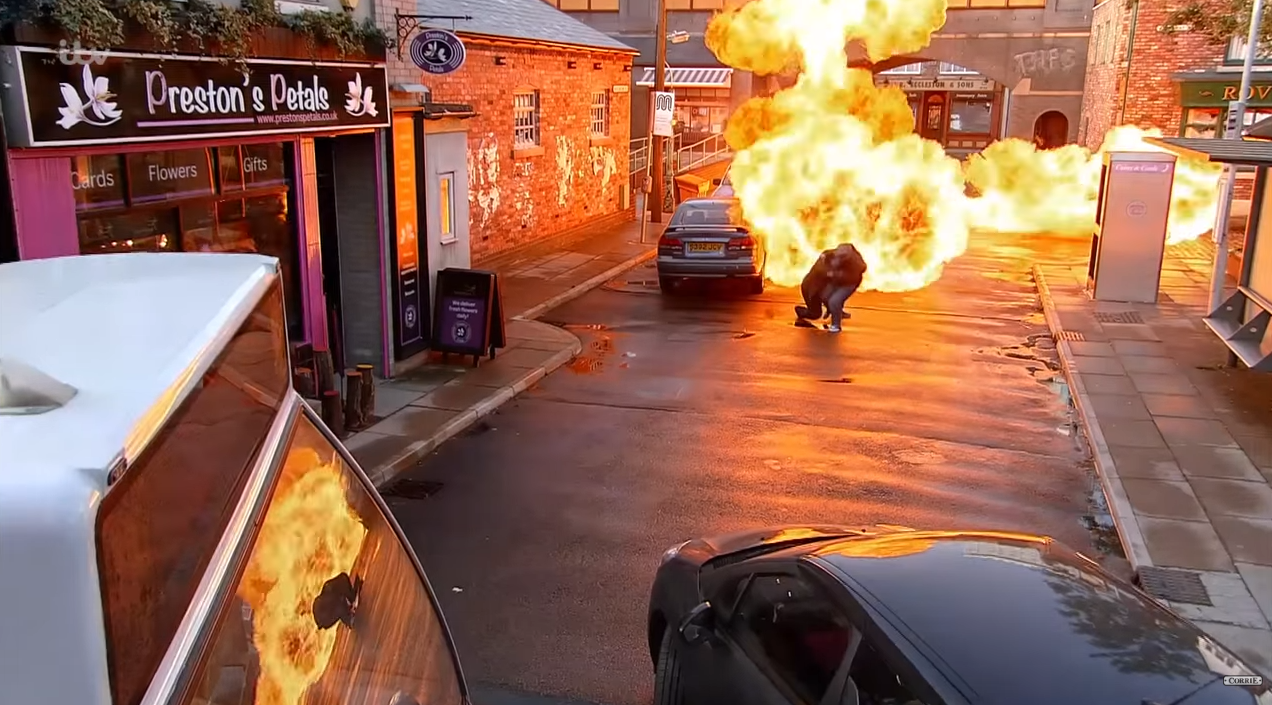 If hell hath no fury like a Mad Maya scored, it definitely hath no fury like a David Platt (Jack P Shepherd) scorned. Grieving the death of his wife Kylie Platt (Paula Lane), David wanted to punish her killer, Clayton Hibbs (Callum Harrison), intending to crash his car into the police van carrying Clayton to court, igniting a lot of petrol, and blowing them both up.

Finding out about his plan, David's mum, Gail (Helen Worth), brother Nick (Ben Price) and sister Sarah (Tina O'Brien) locked him in the Bistro cellar to keep him out of harm's way.

David escaped though and got to his car before speeding off. But he spotted daughter Lily in the road and swerved to avoid her, flipping the car. It landed on Gary Windass (Mikey North) who had tried to get Lily to safety, but he got away and David was able to get out of the car too.

But a spark was ignited and with the vehicle covered in petrol, it soon burst into flames and engulfed a nearby Anna Windass (Debbie Rush) in fire. David paid her £19,000 compensation and everyone moved on with their lives. 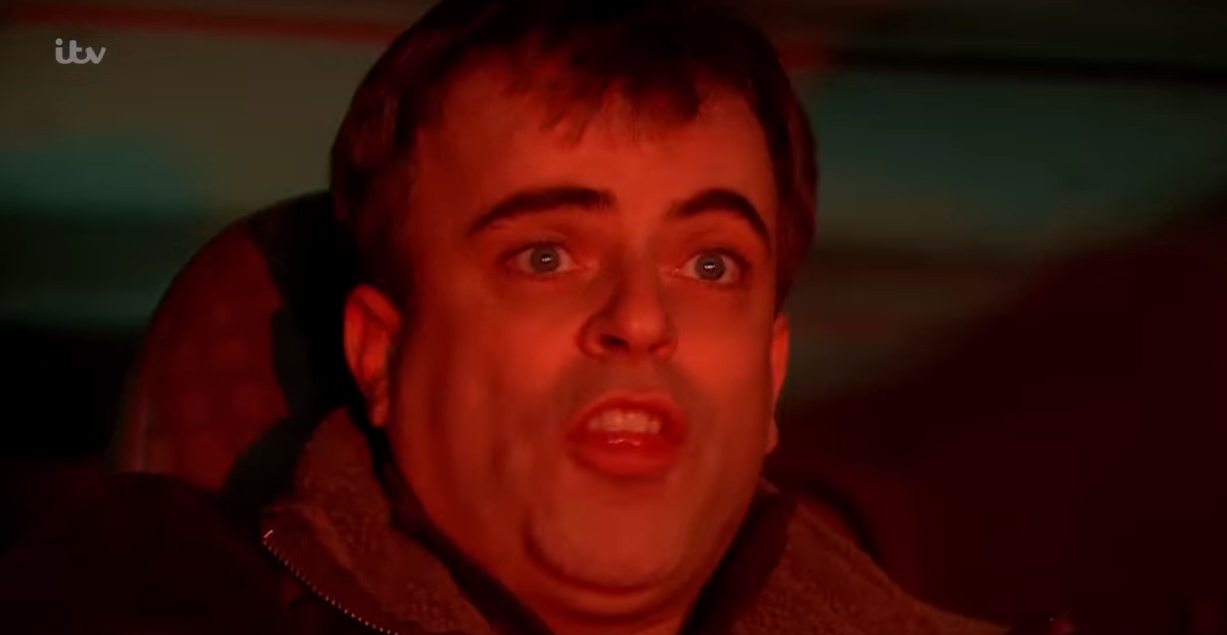 Steve was driving when the minibus was run off the road (Credit: ITV/YouTube)

In January 2015 Steve McDonald (Simon Gregson) was diagnosed with clinical depression. A few weeks later he was driving the Underworld staff to an awards ceremony and was chased by some boy racers.

Steve swerved the minibus, crashed, and left the factory staff trapped in the wreckage as it teetered dangerously over the edge of a cliff. Steve, overwhelmed by his illness, failed to help anyone.

Fortunately everyone got out alive, but Sinead Tinker (Katie McGlynn) was left with life-changing spinal injuries and feared she'd never walk again.

Sadly for Sinead that wasn't her biggest fight as she recovered, regained the use of her legs, and is now battling cervical cancer.

10. Richard Hillman drives the Platts into the canal 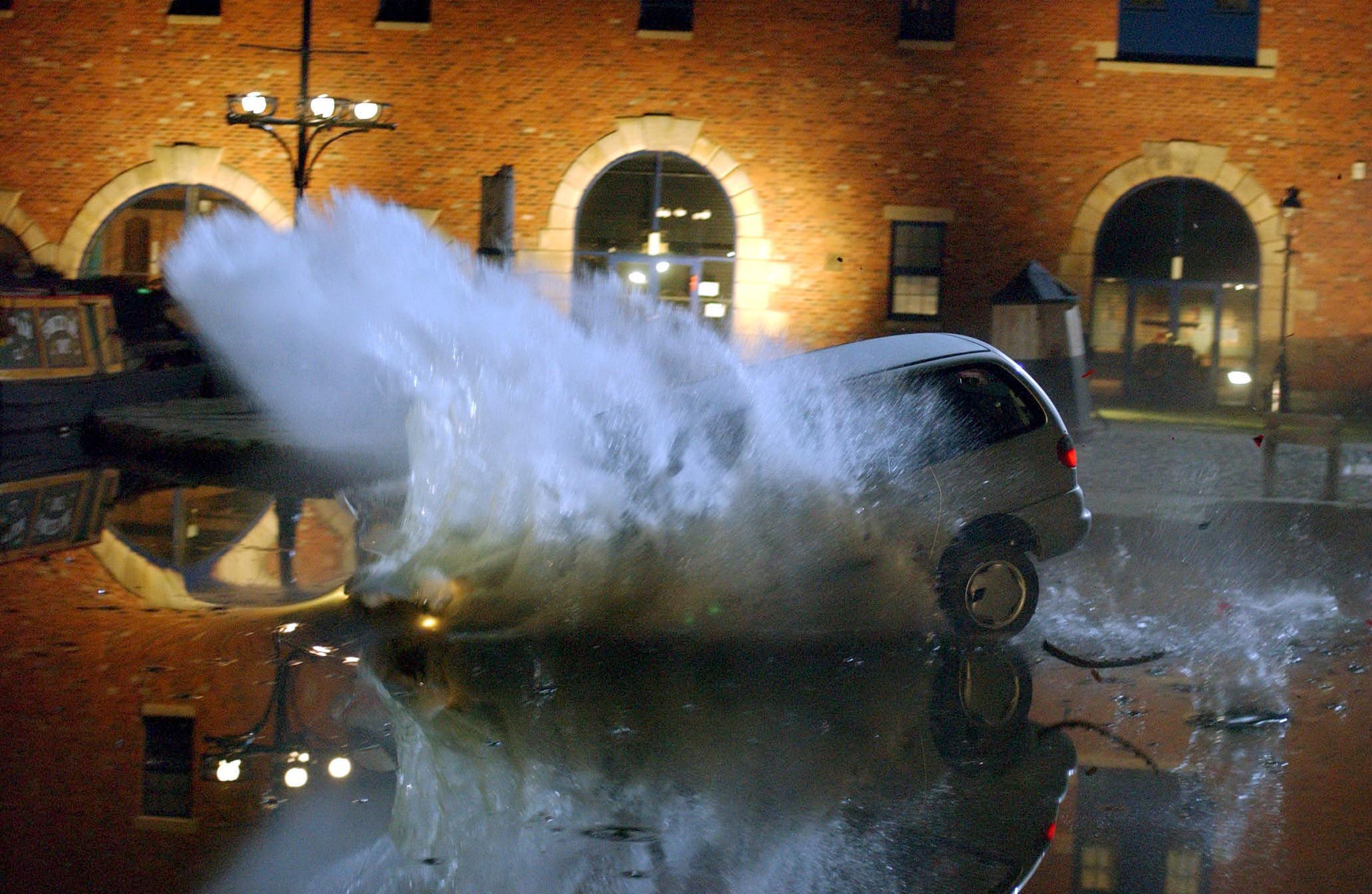 The car caused quite a splash (Credit: ITV/REX/Shutterstock)

Serial killer Richard Hillman (Brian Capron) was determined he and his family would all die together in a murder-suicide after his evil crimes were discovered.

It didn't matter to him that neither Gail, nor her kids wanted to die, he wouldn't lose them no matter what.

Tying them up and putting them in the car, he first tried to gas them all, but was discovered, so quickly pumped his foot on the accelerator and drove the car into the canal in the hope of them all drowning together.

What's been your favourite stunt or disaster in Corrie history? Leave us a comment on our Facebook page @EntertainmentDailyFix and let us know what you think!