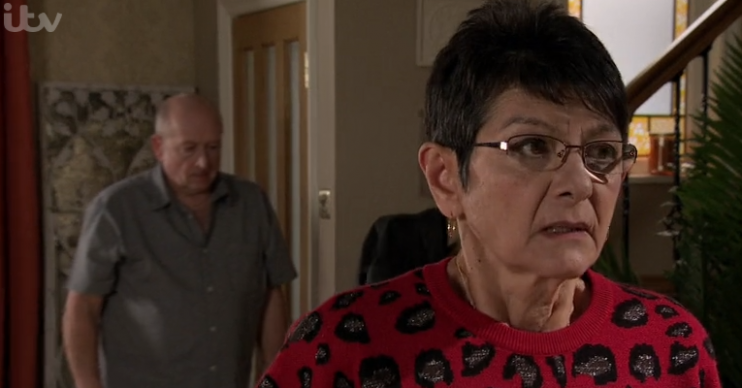 Viewers of Coronation Street want Yasmeen to kill her abusive husband Geoff and feed him to her chickens as revenge.

Over the last few months, Geoff has been abusing his wife Yasmeen as part of a coercive control storyline.

Geoff was furious when he returned home from work and Yasmeen hadn’t prepared the dinner as she had been cleaning out the chicken coop.

When the food was ready, he was even more upset to see she hadn’t included meat with the meal and threw the food in the bin.

Geoff told Yasmeen he would cook but instead of going to the shop to buy some meat, he decided to kill her favourite chicken, Charlotte.

As they sat down to eat, Yasmeen complimented how good it tasted and Geoff said: “Good. I thought she might be a bit dry, being an older bird. Well, at least she’s fed us one last time…

Viewers have now demanded that Yasmeen gets revenge on Geoff by killing him and feeding him to the chickens.

I am really worried about Yasmeen. Geoff is a cruel bully. I hope he ends up being chicken feed. #Corrie

Yasmeen needs to drug Geoff, cut off his penis and feed it to the chickens. 😐 #Corrie

When is Yasmeen going to kill Geoff and serve him up for dinner please? @itvcorrie #corrie

I hope he ends up being chicken feed.

The Ofcom rep said: “We are assessing the complaints against our broadcasting rules, but are yet to decide whether or not to investigate.”

However it looks like Geoff’s abuse is just going to get worse and next week he tries to convince Yasmeen to sell their share in Speed Daal and move abroad.

But when she voices her concerns he twists her words. Will they end up moving away?