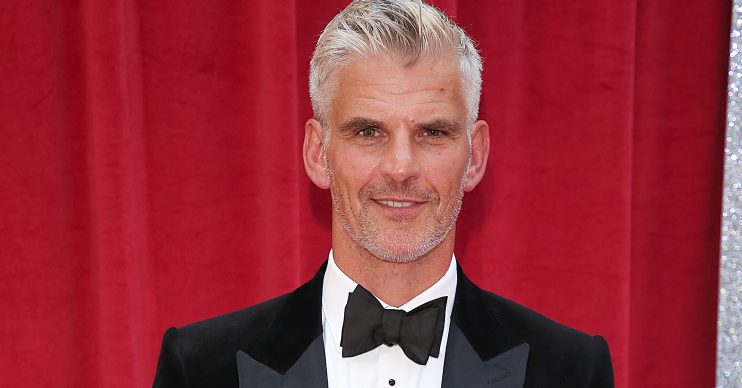 Robert Preston actor Tristan Gemmill is leaving Coronation Street later this year and he has confirmed what his first role away from the soap will be.

Following suit of his fellow departing co-star Faye Brookes, Tristan is set to star in panto!

Revealing the news on his Twitter page, Tristan shared Swansea Grand Theatre’s post and wrote: “People of Swansea – I am coming to throw sweets at your children. Get your tickets now!”

People of #Swansea – I am coming to throw sweets at your children. Get your tickets now! https://t.co/7uVjATTK8Z

The star is set to play Captain Hook in Peter Pan, alongside former Britain’s Got Talent semi-finalist Ricky K as Starkey.

“There is still a lot of drama & shenanigans to come for Robert but I will be leaving Corrie later in the year.”

Folks, I just wanted to let you know that the time has come for me to hang up the chef’s gear and head for pastures new. There is still a lot of drama & shenanigans to come for Robert but I will be leaving @itvcorrie later in the year.

There has been no confirmation how Robert will departe the cobbles, but with all the drama he’s wrapped up in at the moment, we’ll wager it won’t be quietly!

In Friday’s episodes (June 14, 2019) Robert got back together with former flame Michelle, however what he didn’t tell her was he was already seeing someone else.

As Robert claimed he had to go meet an ex-con to help with job interview skills, he turned up at Vicky Jefferies’ house and was greeted with a kiss, showing the pair were clearly seeing each other.

However, Robert was there to end his relationship with Vicky. He didn’t mention he had got back together with Michelle but said he needed to focus on the Bistro.

Originally Robert and Michelle split up over his desire for a baby and her realisation that she never wanted to be pregnant again after the loss of her son, Rauri.

On Monday (June 17) as Robert planned his surprise proposal at the Bistro for Michelle, Vicky’s son, Tyler, discovered his mum was pregnant and Robert had left her.

He noticed his mum was upset and he offered her a beer, telling her that Robert was a snob.

She refused the alcoholic drink saying: “It’s kind, but I can’t”.

Tyler then said to his mum: “Don’t tell me you’re up the duff?”

She responded with: “I can choose to not have a drink sometimes,” but when Tyler said “So you’re not up the duff then?” she couldn’t deny it.

Tyler then raged: “And he’s legged it? That sly little rat.”

Vicky then made the remark: “Yeah because you’d never do a thing like that,” referring to Amy Barlow, who Tyler got pregnant at the end of last year.

Tyler then said: “I’ll kill him,” but Vicky warned him that he wasn’t worth it.

As Robert waited outside the Bistro for Michelle, Tyler turned up and punched him – revealed Vicky’s pregnancy to a shocked Robert.

With Robert set to go ahead with his proposal and actress Kerri Quinn, who plays Vicky, revealing he’ll “lead a double life”, could Tyler make good on his threat.

Will he kill Robert? Is that how he’ll leave the soap?

Do you think Tyler will kill Robert? Leave us a comment on our Facebook page @EntertainmentDailyFix and let us know what you think!