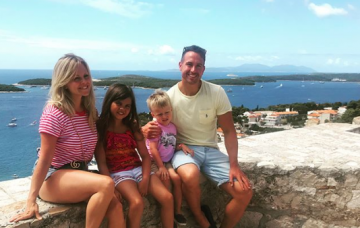 That's what you get for summer skiing!

Corrie star Tina O’Brien has shared a picture of her fiancé Adam Crofts nursing an injury after a calamity on their date.

The father of her son, Beau, is sporting a bandage on his forehead, covering a cut incurred on a literal ski ‘trip’.

The loved-up soap actress couldn’t help but slip in a compliment, too, though, declaring he was still fit. (It’d be rude to disagree, Tina!)

Presumably the couple had been getting in some training on a dry slope; Adam has introduced Tina, 35, to skiing proper.

Last month she shared a throwback pic to her first ski holiday, thanking Adam for opening her world to it.

#TBT to my first ever ski trip. The start of new adventures. I had times where I was consumed by fear and doubt and was shaking like a leaf 🍁 I feel incredibly proud that I pushed out of my comfort zone and had such a wonderful experience. I’m sure every time I’m up a mountain I’ll still experience doubt and fear but I can tell myself I’ve done it once and I’ll keep getting better and better if I trust in myself. Thank you @adamcrofts for your kindness and patience helping me down the mountains #bambionice and opening my eyes to A whole new world.🌍 (she then bursts into singing a badly tuned version of the Disney classic) Out of your comfort zone = where the magic happens

He told OK! Magazine he couldn’t wish for a better stepfather for his child.

The 34-year-old added: “As a stepfather in Scarlett’s life, I’ve hit the jackpot. She adores him.”

Ryan said he’d previously spent Christmas with Tina and Adam, revealing: “They welcome me into their home all the time and that’s really special.”

Tina and Adam met six years ago at a coffee shop when Scarlett went over and said: “Hello, man!”