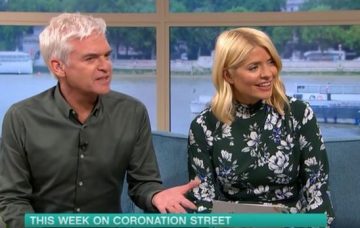 It's been criticised by many fans, too...

The hosts of ITV’s This Morning went so far as to describe the baby swap plot as “unbelievable”.

And they aren’t the only ones who have complained about the controversial scenes between Liz, Jim and their long-lost daughter Katie (now called Hannah).

During a round-up of the soap’s upcoming storylines with expert Sharon Marshall, the duo expressed their concern over Coronation Street’s latest newcomer Katie.

And they aren’t the only ones who have had trouble coming to terms with the latest twist in Weatherfield.

Viewers will know that Jim McDonald returned to the cobbles recently with shocking news to share with Liz – that the daughter they thought had died in 1992 is actually alive and well.

And Holly and Phil have branded the storyline as “unbelievable”.

On Tuesday (11 September), Holly said: “This seems slightly unbelievable somehow. I know it happens, but I don’t know. Is it right?”

Phillip agreed, adding: “Don’t you think the hospital would have noticed there was a baby left over?”

Even Sharon acknowledged the similarity to the infamous Michelle Connor baby swap storyline, where Michelle found out her biological son Ali had been swapped at birth, so she took home Ryan.

However, Sharon hinted that everything might not be what it seems, saying: “All I will say is trust in the award-winning Coronation Street. Maybe watch this week, maybe watch Wednesday.”

Teasers reveal that Hannah and Jim are actually in cahoots over some scheme or other, and Steve McDonald soon smells a rat.

After some digging, he and Tracy find out all is not what it seems with Hannah.

Is she really Liz and Jim’s daughter?

Meanwhile, the plot has been described as “ludicrous” and “offensive” by ITV viewers.

Coronation Street scriptwriters were heavily criticised over the plans to bring Liz and Jim’s daughter ‘back from the dead’.

If true, this is not just insulting, it's offensive. How many viewers would have suffered the same loss as Liz and Jim. The death of their premature baby, Katie, was beautifully told. You don't wipe out those scars with some far-fetched, insensitive plot twist. #coronationstreet

An outraged fan wrote: “If true, this is not just insulting, it’s offensive. How many viewers would have suffered the same loss as Liz and Jim. The death of their premature baby, Katie, was beautifully told. You don’t wipe out those scars with some far-fetched, insensitive plot twist.”

What do you think of the McDonald storyline? Leave us a comment on our Facebook page @EntertainmentDailyFix and let us know what you think!