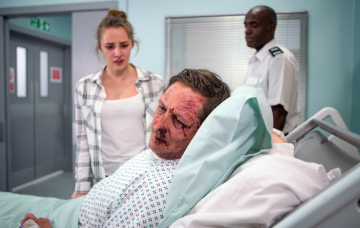 The former cop is attacked after losing his appeal

Evil rapist Neil Clifton is rushed to Weatherfield General in Coronation Street next week after he’s brutally attacked in prison by fellow inmates.

The former policeman – who was part of the gang who groomed and raped Bethany Platt last year – gets the beating after he finds out his appeal to get out of jail has failed.

As news that Neil has lost his appeal reaches Bethany, his daughter Kayla visits him in hospital and is horrified by what she sees.

Kayla has been secretly spying on Bethany by pretending to be her friend and seducing her best friend Craig Tinker.

She’s pumped naive Craig for details about Bethany, even managing to get him to admit to her that the blonde worked as a lapdancer while she was underage.

Kayla was hoping that the information would help her dad out with his appeal so she’s gutted to hear he’s lost it.

She dumps Craig thinking there’s no point in carrying on the charade now the appeal has been lost.

But when she sees Neil in hospital and realises what he’s going through in prison, she thinks that he’s the victim and decides to carry on with her revenge plot – but purely to get back at Bethany this time.

She seeks Craig out and tell him that she made a mistake dumping him and that she wants him back.

The Speed Dahl waitress also tells him that she was scared by the depth of her feelings for him and that she loves him.

Craig is stunned by her admission and takes her back.

Later they head to Craig’s flat where they sleep together. Kayla is pleased that smitten Craig is still well and truly under he spell.

As they head off to have lunch at the Bistro, she slides Craig’s keys out of his pocket. What is she planning now?

Corrie fans were left stunned earlier this month when Kayla’s true identity was revealed and nasty Neil made a shock return to the ITV soap.

In scenes that aired on 21 June, Kayla was seen visiting her dad in jail, where he is serving time for raping Bethany Platt as part of Nathan Curtis’ sex grooming ring.

Viewers saw her quizzing him about his appeal, and revealing that she’s done some digging into Bethany’s life and discovered that she’s been working as a lapdancer.

It became clear during their conversation that Kayla believes Bethany is fully to blame for her dad being in prison.

Clearly worried about him, she was upset to see bruises on his face.

Kayla has clearly been led to believe her dad was set-up by Bethany, and is determined to help her dad’s appeal by plotting against her.

Were you shocked to see Neil back in Corrie? Leave us a comment on our Facebook page @EntertainmentDailyFix and let us know what you think!